Editor’s Note: These whiskies were provided to us as review samples by Highland Park. This in no way, per our editorial policies, influenced the final outcome of this review.

Highland Park Distillery on Orkney Island continues its drumbeat of Nordic-themed releases with a new line of travel retail exclusive bottlings with names designed to appeal to the 15-year-old Eagle Scout in all of us.

Spirit of the Bear, Loyalty of the Wolf, and Wings of the Eagle are all ornately packaged Highland Park whiskies that pay homage to various attributes of local charismatic megafauna that inspired generations past.

Spirit of the Bear is a non age statement whisky sold in a generously sized one-liter bottle at a pocket-friendly price point of around €50. It pays tribute to the Viking warriors who wrapped themselves in bear skins to harness the animal’s stamina and strength.

Loyalty of the Wolf is 14 years old, also sold in a one–liter bottle at a suggested price of €65. Highland Park says “both wolf and Viking share the strong instinct to protect and defend family and territory,” leading to this homage to loyalty and cooperation.

Wings of the Eagle is a bit more upscale, aged 16 years and sold in a 700ml bottle for a suggested price of €90. In Norse mythology, the eagle sitting atop the tree of Yggdrasil is said to create the world’s winds by beating its wings—thus, Wings of the Eagle celebrates the Orkneys’ “wild island climate.”

Why is Highland Park so focused on Viking culture? Orkney was indeed under Norse rule for several centuries beginning in 875. That chapter in the island’s history ended in 1472, but many Orcadians still sense strong cultural ties to Scandinavia, a feature Highland Park happily exploits to differentiate itself from its more, erm, “Scottish” Scotch competitors.

In addition to this wild series of travel retail whiskies, we also got the chance to taste a slightly higher proof variant of Highland Park’s mainline 18-Year-Old Viking Pride release, also exclusively for the duty free market. 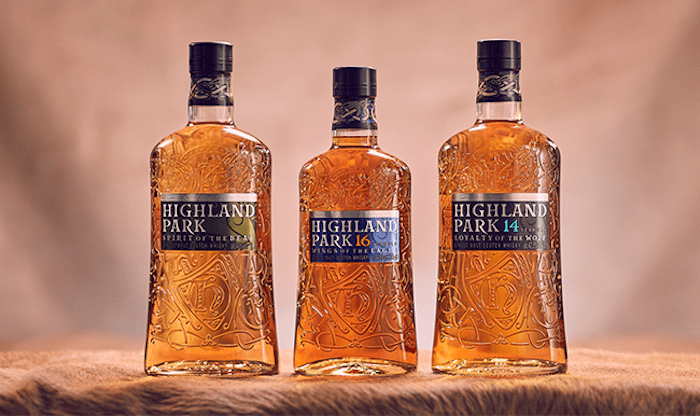 The Spirit of the Bear, Loyalty of the Wolf, and Wings of the Eagle Highland Park whiskies (image via Highland Park)

Tasting Notes: Spirit of the Bear

Palate: Very roasty-toasty at first – coffee bean, chocolate, toast, grape nuts. There’s a bit of toffee, sweet cinnamon, a touch of orange, and a good whack of earthy smoke in the back half of the palate before the whole thing leaves on almond skins and peanut brittle. A very nice entry-level whisky that exceeds expectations at its price point – every bit as good as its age-stated brethren.

Nose: At first this smelled just like an old woven cotton shirt pulled from a forgotten closet – a little musty, a touch of floral fabric softener. That clears, and quite a bit of fruit emerges—apple, yellow cherry, orange—plus a little caramel, pencil shavings, black pepper, and a touch of anise.