Editor’s Note: These whiskies were provided to us as review samples by M.S. Walker. This in no way, per our editorial policies, influenced the final outcome of this review.

My history with blended scotch is hit and miss. Like single malts, blended scotch varies in quality, character and price range. There are the most recognizable blends such as Johnnie Walker and Dewars, and there are the more boutique brands distributed by companies such as Compass Box. One vision behind blends is to create something specific, much like a mixologist will do with a cocktail. The other idea being to enrich lesser quality grain alcohol by adding higher quality scotch to smooth out the whiskey. This concept is employed to create a whiskey that that has the character of a higher end spirit without the price tag.

In this batch review of two Grand MacNish offerings, I found my pallet up against another hit and a miss with two limited edition blended scotch offerings. Not bad for a company capitalizing on one of the beloved names in blended scotch. The intent behind Master Blender, Scott Sneddon, appears to be based on mixology instead of economy, engaging the drinker in his patchwork of flavors instead of simply drinking to drink.

Robert MacNish based his concept of whiskey on the idea that there could be a better drink if you were willing to take the time, expertise, and creativity to tinker a bit. One of his first endeavors that helped to establish his brand to the drinking community incorporated around 40 different whiskeys to deliver the desired flavors he envisioned.

His stubborn approach and unwillingness to compromise on his vision endeared him to such endorsers as Ernest Hemingway lauding his whiskeys to the public. Bold flavors tend to attract bold characters and that has been a defining element of the MacNish brand for over a hundred years.

These days Grand MacNish delivers high end products in nostalgic packaging still endeavoring in the mixologist mindset of the brands namesake with their small batch whiskeys. 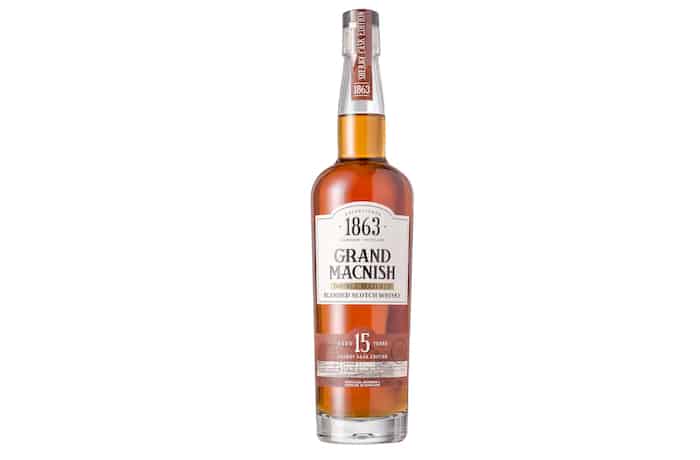 Vital Statistics: Only 5,400 bottles of this 86-proof limited edition whiskey were produced. Before bottling, the final few months of maturation takes place in rum casks. This process is meant to smooth out any rough edges, while bumping up the flavor. Scott Sneddon’s past experience at Glenkinchie is evident in the flavor profile presented by the rum cask edition.

Nose: With my first whiff, I encountered bright orange peel. I also detected a hint of banana and the soft note of oak. The scents that mingled in the nose were quite evocative of the Caribbean, establishing a firm grip on the perceived intention behind the inspiration for this whiskey.

Palate: My concern at tasting an overly sweet, citrus laden whiskey was washed away as my tongue soaked in the first taste. I was pleased to find that the smooth entrance of citrus notes and sugars were not heavy handed. They took a backseat to the oak and brown sugar that peaked out, presenting a pleasant heat that chased the soft leather and oaky notes around. There was a hint of sweet without being too sugary.

I was surprised at the subtlety of the citrus compared to the predominance it had on the nose. But as hard as I searched for more nuanced flavors, I was left with enjoying the easy drinking quality instead of challenged to identify deeper flavors.

Summary: I would have no problem chasing an afternoon of prose down like Hemmingway, a glass of this at hand. The smooth quality and rich texture are perfect to appreciate while focusing the mind on creative endeavors or while competing for the best fish story with your friends. It is also a nice introductory scotch for those that fear the more intense flavors of the legendary peated whiskies from Islay.

Vital Statistics: Also clocking in at 86 proof, the same statistics align for this offering with only 5,400 bottles available to the public. One of the main differences is the aging in Sherry Casks vs the Rum Casks of the 13-year old. It is still aged in American oak before finishing its second maturation soaking in the Sherry characteristics.

Nose: I was expecting a series of different notes to play around in when I dove into this. I was disappointed at the singular flavor that my nose could not escape. I was overwhelmed with the smell of butterscotch candy. It was sweet and sharp and I could not get past the singular character that shouted my senses down as I sniffed away.

Palate: The 15-year-old whiskey was aggressive and sweet. It relied on a dominant cinnamon and butterscotch candy flavor. There were citrus notes hiding in the background and it had an oaky finish, but the heat was more intense than the 13 and lingered like an uninvited holiday guest. There were molasses and brown sugar notes coating the tongue as well, ratcheting up the too sweet nature.

Summary: I’m sure this whiskey would be in interesting choice to water down with soda or a fist full of ice, but I was left wanting at the end of my glass, and not in the way that made me want to pour another dram.