Editor’s Note: These whiskies were provided to us as review samples by Bacardi’s. This in no way, per our editorial policies, influenced the final outcome of this review.

Dewar’s today is noted for being the fifth largest blended Scotch whisky brand in the world and top selling Scotch whisky in the US. Dewar’s first took hold in the States in the late 19th century, thanks to relentless advertising and pre-Insta celebrity endorsement. They’ve been on a growth trend ever since (with a short break for that whole Prohibition business).

As part of a recent release Dewar’s unveiled not too long ago a trio of 500mL bottles: the Double Double Series. These expressions were initially available only in global travel retail shops and result from an extremely laborious process. Dewar’s is known for double aging, the technique of bringing their grain and malt whiskies to maturity, blending them together and aging that resulting whisky again.

Current Dewar’s master blender Stephanie Macleod took it up a notch with the new collection. In the four-step process, various malt and grain whiskies come of age, and then like is blended with like. The separate blended whiskies are aged again for about six months.

“We then blend the grains and the malts together and put them back into [neutral oak] casks and back into the warehouse,” said Macleod at the time. “Then we put the whiskies into three different types of sherry cask. They then rest in said casks for up to a year. For this line up a 21 year gets Oloroso, a 27 year the mysterious Palo Cortado and a 32 year a sweet Pedro Ximénez. 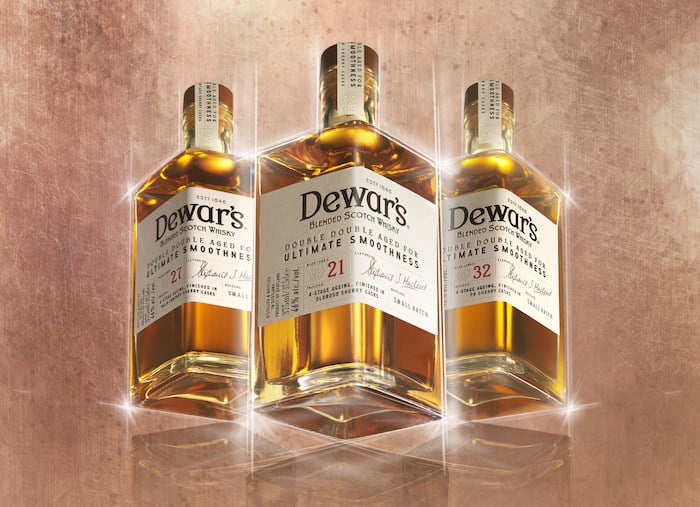 Vital Stats: The Double Doubles are 92 proof and have an undisclosed mash bill, though they are all blended Scotch whiskies. The 21 year is aged in Oloroso sherry casks and retails at $90 for 500mL.

Appearance: This whisky is very clear and the color of clover honey. It quickly forms uniform, medium tears.

Nose: Ocean air and smoked meat on the nose, girded by a mash creaminess. As the whisky rests, aromas of banana peel and unripe apricot unfold.

Palate: At first, this seems fiery for an old whisky. Mingled spices clarify to nutmeg, clove and black pepper and lead to a lingering campfire finish.

Final Thoughts: I wanted more smoothness from a whisky that’s been resting for over two decades. I might be tempted to cocktail with this one.

Vital Stats: The Double Doubles are 92 proof and have an undisclosed mash bill, though they are all blended Scotch whiskies. The 27 year is aged in Palo Cortado sherry casks and retails at $160 for 500mL.

Appearance: The 27 year is very clear and the color of clover honey syrup – just a touch paler than the 21 year. The whisky beads and slowly forms thick tears.

Nose: The nose at the top is saline and half-and-half, opening up to grass, green herbs and cherry pits. As it sets in the glass, a tiny whiff of smoke emerges: smoldering straw and brown sugar.

Palate: This also seems hot for an old whisky! Vanilla extract on the approach, and a silky mouthfeel. Ripe cherry blooms across the mid-palate, and shifts to a long finish of toasted grain.

Final Thoughts: This whisky has a lot going for it; all the interesting notes. I still wanted it to be more temperate on my tongue, but I could sit and smell it for a long time.

Vital Stats: The Double Doubles are 92 proof and have an undisclosed mash bill, though they are all blended Scotch whiskies. The 32 year is aged in Pedro Ximénez sherry casks and retails at $250 for 500mL.

Appearance: In the glass, the 32 year looks like blackberry honey – just a hint of red. It quickly forms fat tears.

Palate: The whisky equivalent of holding a puppy: sweet and warm. Balanced spice and stone fruit, a memory of smoke and a long finish of white flowers.

18
Shares
4.5k
Views
Share on FacebookShare on TwitterGet Our Newsletter
Cheers to the Dads! Personalize a bottle of his favorite whiskey to create a modern gift for the modern man. Use code: FATHERSDAY20 for $20 off your next order of $100 or more at ReserveBar