Whisky Review Round Up: The Dalmore 2011 Rivers Collection

Water plays a crucial role in the life cycle on our planet. After all, without water there would not only be no whisky – there would be no distillers to make it, or drinkers to drink it. Of the elements involved in the production of fine spirits, water is perhaps among the most vulnerable to exploitation. In Scotland, the “big four” rivers are the Dee, Spey, Tay, and Tweed. Each of these are individually and collectively famous around the world as prime salmon fishing destinations. Today, we explore a series of single malts released by The Dalmore in 2011 to represent and protect each of these crucial waterways.

Dalmore master distiller Richard Paterson created the Rivers Collection in order to raise money and awareness for the importance of protecting Scotland’s river habitats. Each bottle bears the uniform Dalmore shape and trademark stag’s head, while an Atlantic salmon graces the individual label of each river derivation. On paper, each release looks very much like the others. All of the releases were matured in ex-bourbon and ex-oloroso sherry casks, as is standard practice with releases from The Dalmore. It is in the subtle blending of flavors where the bottles separate themselves from one another.

A donation from the original retail sale of each bottle in the series was provided to organizations protecting each respective river. Of course, no such benefits exist in the secondary market. All four releases in the series are presented without age statements and bottled at a standard 40% alcohol by volume (80 proof). 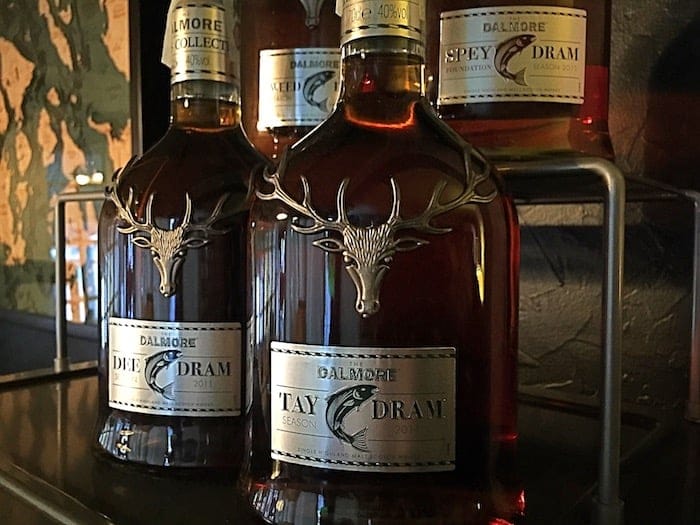 Vital Stats: 40% ABV (80 proof), no age statement, 100% malted barley, originally each entry in the series retailed at £40 per 700 ml bottle, but today a bottle of Dee fetches around $80-$100 online providing you can find a seller willing to part with theirs.

Nose: Loads of red wine on the front end. Sherry, chocolate, spiced oak, cinnamon, nutmeg, and leather polish. The nose is a lively mix of young and bright mingling with dark and almost herbal.

Palate: Sweet and nutty. Notes of walnut, date pinwheel cookies, a hint of bitter citrus rind and cough drops with menthol. Sherry comes late in the finish, never stopping to say hello, but slowing to wave as it passes. Overall, fairly soft in terms of flavor and burn from beginning to end. Quite a friendly sipper.

The opening of the series, Dee Dram sips like a young Dalmore. There is not a tremendous amount of uniqueness to turn the head of the sipper. Merely a competent representation of what The Dalmore typically brings to the table.

Nose: A dark nose, especially when compared alongside the rest of the collection. Notes of stained teak wood with candied cherry, red licorice, apple butter, and pumpernickel bread.

Palate: Very soft and subtle approach as the whisky crosses the lips. Notes of zucchini bread, dark chocolate with toffee bits, a bit of red grapefruit. The finish is soft, subtle, and dark in keeping with the nose and palate thus far. Continued chocolate notes with dark coffee as a warmth washes over for the burn. Lingering toffee in the mouth.

I found Spey Dram to be the least engaging of the series. There were no identifiable flaws in the whisky, however there were no moments of brilliance, either. Found at a reasonable price, the malt is a fine example of clean Dalmore flavor, if a tad underwhelming.

Palate: Subtle flavors at first. Not immediately opening up to reveal anything predominately. First notes I get are vanilla bean ice cream with a ribbon of salted caramel before the chocolate notes hit late in the mid-palate. Loads of chocolate throughout the finish, hot cocoa with marshmallow, mingling with hints of sherry, but mostly chocolate. Did I mention the chocolate? A genuine surprise in the palate through the finish.

A lovely dessert whisky. Easy sipping, warm, and delicious. I found the chocolate notes to be an absolute joy which brought a smile to my face each time I sat myself down to become acquainted with the whisky. A fun Dalmore, to be sure.

Palate: Quite subtle flavors mingling here. Hints of cream soda, dry roasted almonds, and a decent amount of toffee candy. The longest finish of the lot. Not the most intense burn, mind you. Just a lovely, lingering burn of medium intensity. The definite highpoint of the palate. Masterful finish. Truly a delight and, to be honest, a surprise. Lingering notes of vanilla and charred oak.

Tweed Dram presented me with the type of finish which had me stopping mid-thought (or even mid-sentence) to cast a surprised glance back at my Glencairn glass. I could not hide my amusement as I more than once asked the finish precisely where it came from. So often a finish can break a whisky, and with Tweed I found the finish had rescued the dram as a whole from the brink of mere adequacy and propelled it forward to the realm of the truly enjoyable.

Whisky enthusiasts have a tendency to be collectors. Not all, of course, but many do. In that sense, releasing such a collection as a moderately-priced four bottle series seems like a surefire way for a distiller to quadruple sales of a limited release. I find it difficult to imagine a person seeking out one particular bottle in this series while forsaking all others. I realize that may have happened on occasion, but that must surely be the exception and not the rule.

In this case, the raising of money and awareness for worthwhile causes tends to slice through my initial cynicism towards the marketing involved. When all is said and done and all four corks have been popped, The Dalmore Rivers Collection added up to an interesting and occasionally supremely enjoyable lineup of undoubtedly finely crafted single malts.

Shares
813
Views
Share on FacebookShare on TwitterGet Our Newsletter
Cheers to the Dads! Personalize a bottle of his favorite whiskey to create a modern gift for the modern man. Use code: FATHERSDAY20 for $20 off your next order of $100 or more at ReserveBar