Since being launched in 2000 Compass Box Whiskey Company has been pushing boundaries, ruffling feathers, winning admirers, and taking on the establishment of the Scotch Whisky Association. Founder John Glaser, five-time recipient of Whiskey Advocate’s Innovator of the Year award, is an American businessman that originally got his start in wine. Headquartered in Chiswick, just to the west of Fulham and south of Wembley, Compass Box has released over 15 expressions, but they consider five to be a part of their Signature Range. Never distilling their own whisky and sourcing from at least a dozen distilleries, Compass Box is a boutique craft blender.

The Signature Range consists of two Highland blended malts, a Lowland blended grain, a blended malt, and a blended scotch. A Speyside distillery is also included in each of the Highland blended malts, with two of them – Oak Cross and The Spice Tree – having very similar properties in that they both have the same whiskey proportions from distilleries located in Alness, Brora, and Carron. Where they differ is in their oak aging. Oak Cross is majority aged in American oak, while The Spice Tree is aged primarily in French Oak, giving the latter whisky a spicier, more rich palate experience in comparison.

The Peat Monster is the remaining blended malt and contains whiskey from an Islay south shore distillery, a Highland malt, and a peated Island malt. The Islay single malt is the majority of the blend and knowing it is south shore limits the possibilities of sourcing to Ardbeg, Lagavulin, or Laphroaig. The Island single malt is the minority in the blend and since it is peated that too would seem to narrow the possibilities of which distillery Compass Box is sourcing from. If Glaser and Compass Box eventually get their way, they will tell us which distilleries they use.

Between the five whiskies all three styles of blended Scotch are represented and the three blended malts exemplify the versatility of flavors scotch can produce. Anyone interested in learning more about blended whisky would do well to explore the offerings of Compass Box. 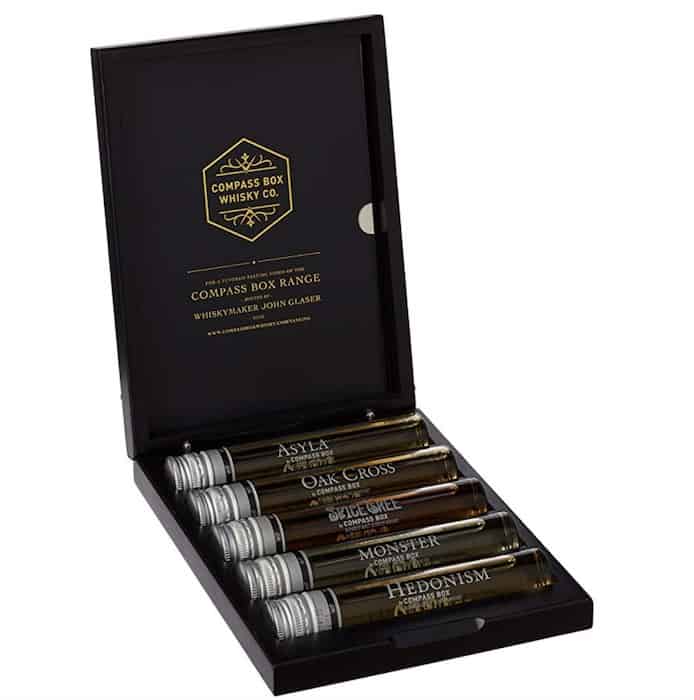 Nose: Asyla – Bright with a subtle crispness of apple and pear. Reminds one of a cool breeze.

The Spice Tree – Like a warm mocha that’s been spiced with clove and cinnamon.

The Peat Monster – As if you were to enjoy an orange drizzle dessert while sitting around a campfire near the sea.

Hedonsim – Smells delicate with a soft, creamy coconut that allows one to deeply inhale.

Palate: Asyla – Pillowy mouthfeel that booms with ripe fruit yet settles in savory on the finish.

Oak Cross – Exceptional balance of clove, bright fall fruits, and vanilla. Less rich than the nose would lead you to believe.

The Spice Tree – Somewhat bready with toffee ever present through the experience. Creamy and full-bodied, leading to full, long, whole finish.

The Peat Monster – Rich, like that of a salted caramel breve. Peaty enough so you know its there, but far from being strong. The peat is strongly subtle, if you will.

Hedonism – Decently creamy and definitely grainy. Slightly astringent but vanilla hangs out forever on the finish, making it pleasant.

Compass Box Whiskey Company will always keep you on your toes. They openly embrace going against traditional methods of scotch making. They continually push the envelope of what can be considered Scotch and also fight to end the traditional secrecy surrounding how some scotches are made. The Compass Box Signature Range would be a great introductory flight for anyone interested in wanting to know more about scotch.