The Rough Riders were the first Voluntary Cavalry in the United States, organized by Theodore Roosevelt in Long Island in 1898. One thousand, two hundred and fifty men made up the unlikely band, including “cowboys, Indians and Ivy League athletes and aristocrats – who craved adventure, and ultimately claimed victory at the Battle of San Juan Hill.” The men were united on a quest for adventure, although they parted ways after just 137 days (presumably because of creative differences.) This unlikely band of American heroes was the inspiration for Long Island Spirits’ Rough Rider Straight Bourbon Whisky.

Original batches of this whiskey, such as the one I am reviewing, came from the Midwest, and then were further aged a second time in Merlot and Chardonnay casks from Long Island wines, which were previously washed in high-proof brandy. More currently the whisky is distilled on site. 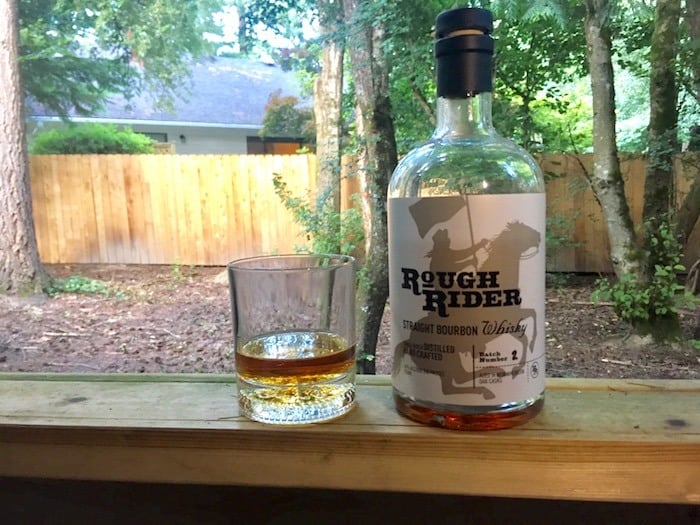 Vital Stats: The mash bill is 60% corn, 35% rye, 5% barley, aged in new charred American Oak Barrels, with a second aging in Merlot and Chardonnay casks, washed with high-proof brandy. My bottle was from batch two.

Appearance: Medium-amber colored, with an oily body, but not syrupy. The bottle from batch two appears to have been rebranded, into a more modern looking bottle.

Nose: It begins with sweet, warm butterscotch, and mellows into a toasted oak. It’s sweet-smelling, like a marshmallow candle or a boozy Werther’s Original Caramel Candy.

Palate: I think this is the most easy-drinking whisky I’ve enjoyed. The spirit kicks off the flavor adventure with toasty butterscotch, blackberries, and a light woodiness. The sweetness continues into dark cherry, almost port-like vinous zip. Brandy flavors aren’t immediately apparent, but they snuck up during the finish.

If you have a sweet tooth, you’ll probably really enjoy this whiskey. It was very smooth and easy to drink, with complex flavors because of the wine-barrel and brandy finish. I would definitely buy this whiskey again.