Editor’s Note: This whisky was provided to us as a review sample by Rampur Distillery. This in no way, per our editorial policies, influenced the final outcome of this review. It should also be noted that by clicking the buy link towards the bottom of this review our site receives a small referral payment which helps to support, but not influence, our editorial and other costs.

The Rampur Distillery, in the Uttar Pradesh state of India at the base of the Himalayas, began in 1943. Over the decades, Rampur has grown into a larger conglomerate, Radico Khaitan Limited, which produces “Indian Made Foreign Liquor” or IMFL. Rampur released their first single malt in 2016. Although they have been distilling for decades, they provided blended spirits for other brands. One of their offerings, Rampur Asava, is a one-of-a-kind whisky that is finished in Cabernet Sauvignon barrels; not just any Cab Sav, but Indian Cab Sav.

When one thinks of wine, like whisky, India doesn’t spring to mind as fast as France or California. However, wine in India is traced back to the Bronze Age. Persian traders brought the practice with them to the country. Eventually, the phylloxera epidemic, along with government disapproval, wiped out viticulture until the 1980s.

In India, Maharashtra and Karnataka are the main regions for winemaking. Many consider Nashik, in Maharashtra, India’s wine capital. However, Rampur does not disclose which winery they get the Cabernet Sauvignon barrels from. Indian wine is imported to the United States, so if you want to try a bottle as a companion to the Rampur Asava, talk to your local wine shop.

I have reviewed other Indian whiskies before, and I have reviewed other whiskies finished in red wine casks and white wine casks. This is the first Cabernet Sauvignon finished whisky for me. The Rampur Distillery sits in a location that also gets arctic conditions, maybe that’s enough to change my mind about maturation in hot climates. Let’s find out. 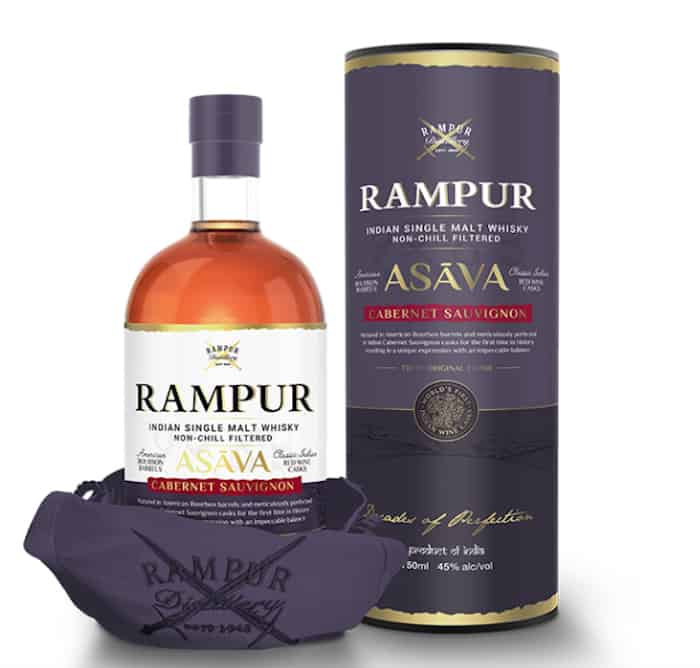 Nose: The nose is abundant with maltiness reminiscent of porridge. With the malt, nuttiness, and cardamom, the single malt reminds me of baklava. Rosehips and herbal tea meet somewhere in the middle while orange peel slowly makes its way to the nostrils. Fresh grapes and baby powder finish off the nose.

Palate: The Cab Sav imparts lots of flavor to the whisky, which is welcoming. The mouthfeel is light and not chewy despite the overpowering taste of grain. The single malt is herbal and floral with mint and rose. Mandarin adds a fruity touch. The finish is full of cracked black pepper. Grape lingers on the breath, but the aftertaste is oaky.

The Rampur Asava is tasty. While the Cabernet Sauvignon shines, it doesn't shine as bright as it can because of the overpowering porridge on the palate. This whisky has changed my mind about Indian whiskies, and I'm willing to try the rest of Rampur's lineup.