Editor’s Note: This whiskey was provided to us as a review sample by Bruichladdich. This in no way, per our editorial policies, influenced the final outcome of this review. It should also be noted that by clicking the buy link towards the bottom of this review our site receives a small referral payment which helps to support, but not influence, our editorial and other costs.

Port Charlotte Distillery was mothballed in 1929. It’s the stuff of legend, but Bruichladdich has rekindled that spark by naming a line of its whiskies after the age-old operation, even going to far as to name some of its more recent whiskies “Lochindaal.”

This was the former name of the old Port Charlotte distillery. Even though the distillery was closed nearly a hundred years ago, the majority of its buildings still remain, In fact, plans are underway to restore them, along with a whisky making operation there. Port Charlotte whisky today, as made by Bruichladdich, is said to be a tribute to the men who gave the best years of their lives to Lochindaal…blah, blah, blah.

Let’s be honest, the name Port Charlotte has gravitas due to its nostalgic history, which may or may not be accurate since very few people have tasted Port Charlotte (Lochindaal) whisky from the early 20th Century. So management at Bruichladdich appropriated the name of a classic yet bygone distillery near them? Good thinking. I would have done the same.

Who says ghosts can’t be put to work? Aye? Many of the men who worked there most likely did backbreaking work for a shit salary and got even less appreciation for their pains. Better late than never, I guess.

Production of Port Charlotte whisky at Bruichladdich first began on May 29, 2001. Incidentally, Bruichladdich distillery is located on the epic island of Islay in Scotland. It’s right across the bay from Bowmore distillery.

Port Charlotte PAC:01 2011 is all about creating a boutique form of peat that comes across as “soft, barbeque-smokey Scotch,” according to the distillery. This was aged in high quality French oak casks. “Two parcels of Scottish barley distilled spirit have matured for a minimum of six years in ex-American oak casks before being transferred to red wine casks from the Gironde left bank, north of Bordeaux. Bottled at 56.1% abv, this spirit showcases stunning spice and fruit notes. It is a rich and elegant, undeniably Islay single malt.” 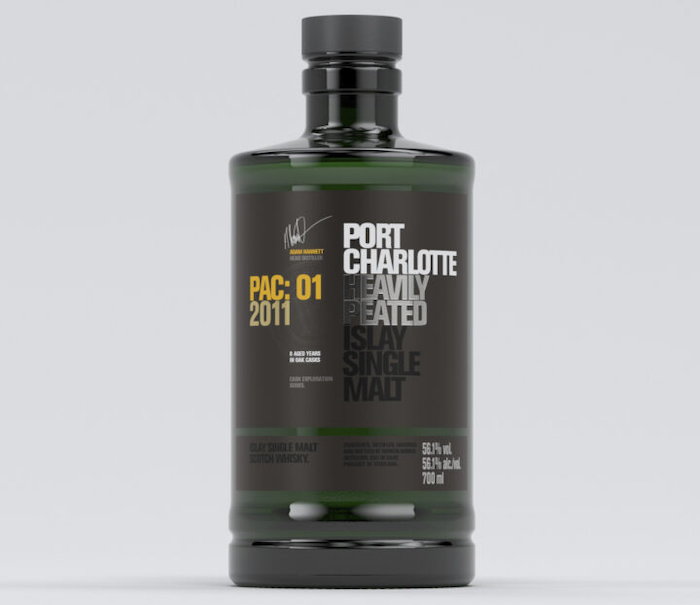 Appearance: Chestnut and Oloroso sherry in color, with beading that yields long and fairly large tears.

Nose: Rich and robust with notes of creosote, tar, clay kiln, a gust of smoke blowing over a calm sea, pine needles, volcanic tilth, whipped cream, vanilla, brown sugar, well-used sauna wood, rhubarb, and sage. I’m reminded of summer days in Bend, Oregon, out on the edge of lava fields, with gurgling brooks nearby, the buzz of insects, and the cloying presence of spicy plant musk carried on gentle warm breezes.

Palate: A sharper peat than Ardbeg with perhaps a bit less roundness of character and depth than Ardbeg’s recent committee release of Scorch; it sticks to the top of my tongue unforgivingly while imparting notes of creosote, smoked ham, toasted waffles, dark chocolate, and cinnamon. The palate is far less complex than the nose, and less pleasing, as well.

The finish is quite long, with the peaty tar outlasting everything else. Well, shit. Make up your mind, Kirk. Now, I’m reminded of ferry pylons in the Puget Sound, which tend to be slathered in creosote. I used to scuba dive with my dad near quite a few ferry landings with giant wolf eels living in amongst the rotten pylons, down lower, betwixt newer ones holding up heavy wooden planks for traffic to board the ferries. Dad and I had to take care not to piss off the huge, square-jawed eels with the flutter of our fins. One wrong move, and your leg was off. Chomp! The finish of this whisky is mouth-coating, while the death is fairly drawn out.

I recommend inhaling the scent of this whisky as it is drunk. Use a glass with a wide enough rim to do both comfortably. As for my overall impression, I've tasted quite a few more pleasing Port Charlottes in my day. However, this one is not bad, by any stretch. I'm not blown away.

If you find PAC:01 2011 at a fair price, then consider pulling the trigger. I wouldn't bother at auction, but that's me. Many diehard peat fanatics in Europe really like this one. Bully for them.

There is something magical about this Scotch that makes me think of places I've been where my senses were freighted with stimulation, as my tasting notes reveal. That's certainly worth something. Why so evocative? Not all parts equal the sum. Sometimes, the difference is more ethereal than even the weight of smoke.