Pendleton 1910 is a Canadian rye that’s made entirely from rye. Which, believe it or not, is just not what you expect from a Canadian rye.

Canadian rye has the same sort of origin as American rye – though they were and continue to be vastly different products. Canadian whisky was being made entirely from wheat at the start. It was German and Dutch immigrants (the same ones making “red” rye whiskey in America) who suggested adding a bit of rye to it.

This practice took off in Canada. They called the new product “rye whisky” though there was only a small amount of rye in the spirit. Even still, Canadian rye was born. While there’s more rye in it today, the rye label isn’t a guarantee of the amount of rye in the bottle. “Rye” on a Canadian whisky label just means cereal grains.

Until recently. Legally, that principle remains standing, and most bottles marked rye will follow suit. The past few years, however, have seen a boom in all-rye production in Canada. A large factor has been the resurgence of American rye whiskey. This came a little out of left field, meaning American distillers didn’t have enough stores of aged rye to meet demand.

Like we did when the Civil War upset American distillation, we looked North. Distilleries had been producing all-rye spirit for use of flavoring, which America happily bottled or blended for straight rye. One such distillery is Alberta Distillers, a high output distillery that makes 100% rye whiskey in pot stills. It was their stores that the much-lauded Whistlepig used to get started.

America isn’t alone in this new focus. Beyond providing for our needs, Canadian distilleries have been on a trend of releasing their own high-rye and 100% rye whiskies. And this time, rye means rye. Both large and small distilleries are putting out these expressions, with the little guys even having a bit of an edge on the Big Eight.

Pendleton joins brands that range from the micro-distillery Still Waters to Hiram Walker & Sons in the release of an all-rye whiskey. One thing that sets Pendleton apart is its American roots. Part of production occurs in Oregon, as does the inspiration for the brand.

Pendleton 1910 is a 12 year old Canadian whisky named for the inaugural year of the Pendleton Round-Up, The Round-up is one of the largest rodeos in the world, and Pendleton’s namesake. This expression goes further with the decoration of the bottle. The embossing and details are meant to represent the saddle of a cowboy, and the Pendleton bucking horse graces the center. 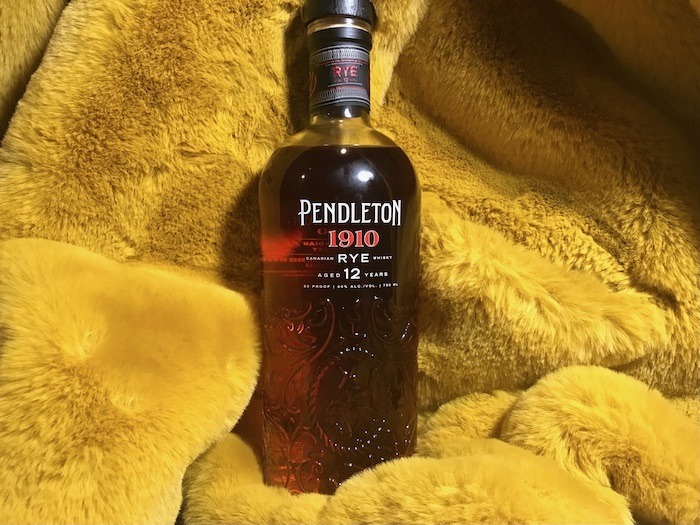 Palate: Brown sugar again, but darker. Brown sugar continues as an undercurrent through notes of fruit candy, like skittles or runts, which blends into the butterscotch on the back palate. The finish dries out with a warm rye kick.

This bottle is a great representative of the future of true Canadian rye. This 100% rye is different than American ryes. While American rye tends to lean darkly sweet or grassy and spicy, this bottle is overtly fruity. It does mellow as you drink it, and the finish reminds you that it’s rye.

It’s overtly drinkable, which I wouldn’t necessarily say about some of the more complex ryes I’ve tasted. I’ll even go so far as to call this my favorite expression of Pendleton.