Tucked away in a charming tourist town on the western edge of the Scottish Highlands, Oban Distillery is one of the oldest and smallest Scotch whisky distilleries, a tiny jewel that’s been producing whisky for nearly a quarter of a millennium.

Founded in 1794, before the town of Oban existed, the distillery passed through several sets of hands during its first century of existence. At one point, it was even owned by the ill-fated Patterson brothers, the infamous instigators of the eponymous catastrophic whisky industry crash of the late 1800s that took down dozens of single malt distilleries.

In the 20th century, Oban endured two different episodes of mothballing: once from 1931 to 1937, and again from 1969 to 1972. Eventually, it made its way (as so many whisky distilleries seem to do) into the Diageo portfolio, where it remains to this day, honored with a position as one of the six Classic Malts alongside Dalwhinnie, Talisker, Cragganmore, Lagavulin, and Glenkinchie.

Oban’s flagship whisky is a 14-year-old single malt. It’s a sophisticated thing, stylistically living somewhere between the brash peatiness of an Islay malt and the more harmonious structure of a Highland whisky (if such a thing can be generalized—there are Highland whiskies of nearly every persuasion). Oban also offers an NAS whisky called Little Bay (the meaning of the Gaelic word “oban”), as well as a Distiller’s Edition aged in fino sherry casks and an 18-year-old expression. 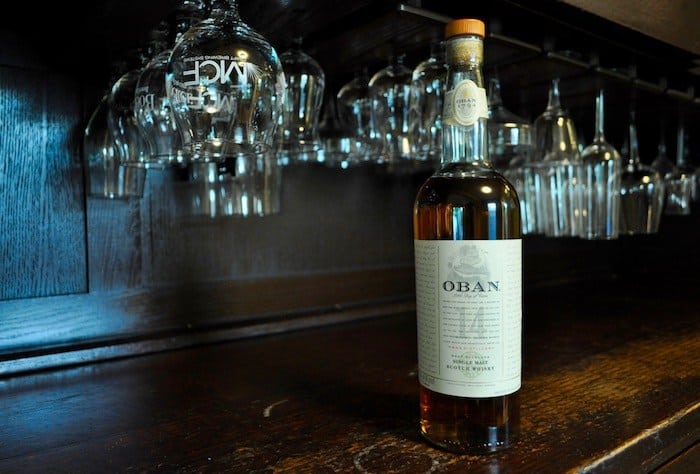 Appearance: Oban 14-Year-Old is packaged in one of the whisky industry’s most beautiful canisters, a cream-and-blue affair adorned with a gorgeous, evocative line drawing of sea birds resting on craggy cliffs. The color of the whisky is a rich amber.

Nose: Lovely sweet aromas of toffee and sticky pudding greet the nose. There’s smoke, but it’s definitely subtle, more a waft than a plume. A surprising amount of tropical fruit also comes through on the nose—caramelized pineapple and plantains, lychee, orange —plus a dusting of zesty cinnamon and nutmeg. Lovely.

Palate: The initial entry is just like putting a big pat of buttercream frosting right on your tongue, quickly followed by tinned fruit cocktail, pineapple and orange and lychee, with a strong caramelized element. Sherry-like flavors of almond and ranice emerge in the mid-palate, accompanied by some nice crunchy sea salt. The overall experience is sweet and lush, but Oban 14 finishes on a welcome bright, acidic note, like apple cider with lemon, or brioche topped with zingy lemon curd.

Oban 14-year-old is just straight-up yummy, balanced and beautiful, multifaceted without being aggressive. There’s tons of fruit and pastry, but just enough peat to keep the stuff from coming off as saccharine. Busting out a bottle of this after your next dinner party will make for some very happy guests.