Editor’s Note: This whiskey was provided to us as a review sample by M&H Whisky Distillery. This in no way, per our editorial policies, influenced the final outcome of this review. It should also be noted that by clicking the buy link towards the bottom of this review our site receives a small referral payment which helps to support, but not influence, our editorial and other costs.

Despite the hot climate and 300 days of sun, Israel is home to many vineyards. At M&H (Milk & Honey) in Tel Aviv, Israel’s first whisky distillery, they have been using local wine casks to age one of their latest whiskies. The M&H Apex Fortified Red Wine Cask promises to showcase terroir while maintaining kosher requisites.

Keeping kosher means that the process has followed the proper preparation according to Jewish tradition based on the laws of kashrut. This stems from the writings of the Old Testament where tradition holds they were given to the Jewish people to keep them distinct as the children of God. The laws also discern which foods are acceptable.

To make whisky kosher, every ingredient must be kosher and production must be under Orthodox rabbinic supervision. While many ingredients like sugar and water are kosher in nature, it is important that yeast and enzymes also be kosher. Many foods grown from the ground, like grain, are kosher. If just one ingredient is not kosher, then the whisky cannot be certified as such.

Fortified red wine is different from regular red wine because it has a distilled spirit added to it. The spirit was not to initially raise the ABV but rather used as a method of preservation. Without airtight bottling methods or refrigeration, winemakers had to figure out a way to prevent their wine from spoiling. As it turns out, it is still quite useful in cocktails and for finishing whisky! 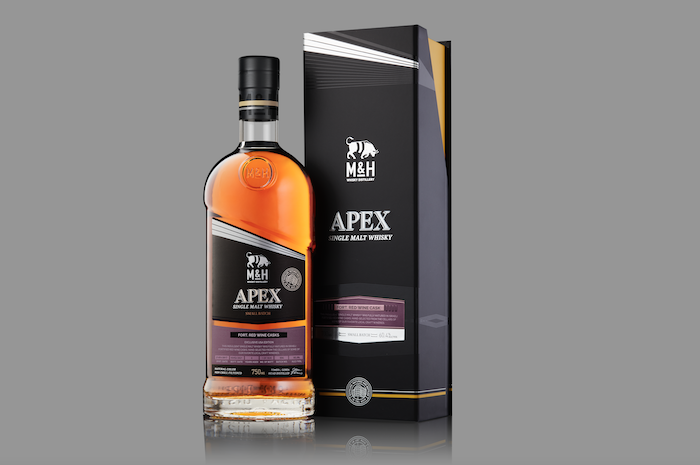 Nose: The first thing I notice is smokey grain. It seems to hover over the whole dram. Fresh garden mint with a sweetness makes the whisky smell like a mint julep. Baby powder follows the mint before making way for the fruitier elements. Juicy blackberry and strawberry mingle with bright apricot.

Palate: The whisky tastes smokey with a bit of mint. Honey makes the whisky seem viscous, but it is just the oily mouthfeel. Apricot and nectarine lend some more sweetness, but in a light refreshing way. There is a funk just before the finish, and black pepper sneaks up right behind. The finish is dry with cocoa powder and berry.

The Apex Fortified Red Wine Cask from M&H Whiskey Distillery has a multitude of flavors, but overall it is not satisfying. What should have been a Rob Roy in a bottle comes off harsh, with the palate searching to make sense of what it has tasted. Maybe the hot climate didn't meld the cask and whisky as delicately as it could have, as something is amiss.