When I think of Scotch, Laphroaig usually comes to mind first. I have been a fan of the Islay single malt maker for quite awhile, and I can’t wait to go find my square foot plot of land when I visit the distillery. For the 2018 Fèis Ìle (Islay Festival), Laphroaig released its Cairdeas Fino Cask. This particular Laphroaig is double matured in first filled bourbon barrels, and then Fino Sherry casks; I will be expecting to taste something sweet. Fino is pale and dry compared to other sherries, and it is aged a minimum of two years all the way up to seven years. Between the bourbon and Fino casks, the scotch will be fairly light in appearance.

A particularly interesting note is that Laphroaig mentions the Cairdeas Fino Cask is barrier filtered and non-chill filtered. A lot of whiskies are chill filtered, meaning the still’s condenser is coiled in a cold water tub that allows the oils to harden so that a cleaner spirit is produced. Chill filtering is usually for aesthetic reasons; adding water or ice to non-chill filtered whiskies can make them cloudy. Barrier filtration is simply using mesh or something to catch the larger bits from the barrels that can be seen floating about the whisky.

The Gaelic term “cairdeas” means friendship. With every release of the Cairdeas by Laphroaig, no matter the variation, it seems like the Islay distillery is reaching out to make new friends and garner new fans. The Cairdeas Fino Cask is a great dram to share. 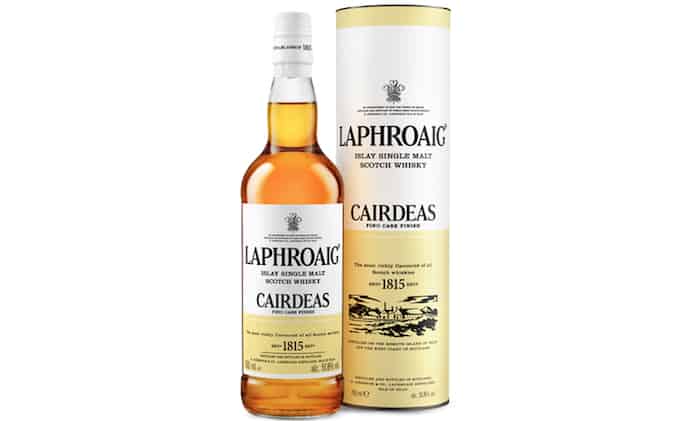 Nose: I expected the peat to just hit, but it was very subdued. Reminds me of being on my uncle’s farm; there’s a strong sense of hay or straw within the peat reek. On the sweeter side of things, the Laphroaig Cairdeas Fino Cask has a nice touch of toasted hazelnut, marzipan, and butterscotch.

Palate: The peat is amazingly mild for a Laphroaig, but you get a nice smoky characteristic throughout the sip. Its light mouthfeel, though a touch oily, really highlights the fruity notes of dried apricot and raisin. It’s very sweet, yet slightly dry with an oak finish. The sweetness is more toffee than vanilla or caramel. Reminds me of a Djarum Black cigarette as clove pops up. The aftertaste is very floral, almost like rose hip tea.

The Laphroaig Cairdeas Fino Cask reminds me of a Speyside scotch with its floral and fruity notes. It’s not as peat forward as other Laphroaig single malts. While it may be too sweet for some, this is a great dram for versatile pairings or a dessert dram. It would even be great in a Godfather cocktail.