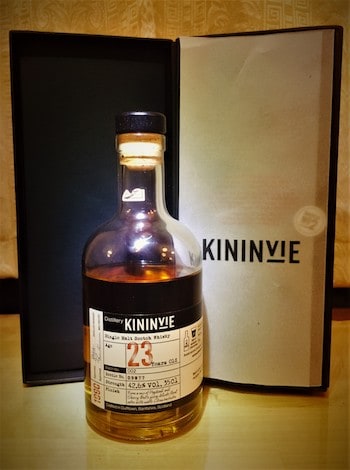 The Kininvie distillery is something of a mystery, until one digs deeper to find out just who in the heck owns it. The cryptic answer is William Grant & Sons.

In fact, several of Kininvie’s releases from the mid-2000’s paid homage to Janet Sheed Roberts, granddaughter of William Grant. She, herself, was director of William Grant & Sons for a time. Upon her death in 2012, Roberts was the oldest woman in Scotland at 110 years of age.

Kininvie distillery–located in Dufftown, Moray–hides rather obsequiously in the Convall hills. This location, which might seem off the beaten path, is actually on the doorstep of Balvenie distillery. Aye, the world of single malt Scotch whisky is smaller than most folks might realize, especially those who’ve yet to visit the Speyside region of God’s Country.

Production at this “little distillery that could” began with six copper stills in 1990. Its mash came directly from Balvenie. The resulting whisky made from six stills was then used by William Grant & Sons, in addition to finding its way into other blends, such as Monkey Shoulder.

These days, Kininvie makes its own mash. The young distillery has been releasing whiskies since the mid-2000’s, here and there, under its own name. The first two were named Hazelwood 105 and Hazelwood Reserve. Both were very limited bottlings.

In October of 2013, Kininvie released Batch 1, which was a 17-year-old travel exclusive in Taiwan. Then came Batch 2. This 23-year-old single malt was released in the United Kingdom during the Summer of 2014. Since that time, a third batch has come out. It is still available for purchase, and costs about $130.

Okay, folks, now it’s time to  pour a glass of the 23 year Old Batch 2, and give ‘er a whirl. I really do like the presentation of this classy little number. Its wooden cork pulls out with a most satisfying “creak ‘n glug.”

Appearance: Old gold in color. Bandy-legged droplets roll down the sides of one’s glass, willy-nilly, back into the bowl from whence they’ve come.

Palate: Creamed honey, stewed fruit compote with peaches, strawberries, and cherries. A hint of wet cedar surfaces from a generous amount of time in oak casks. As the whisky settles into one’s glass, a few spices perk up–such as nutmeg and crystalized ginger. A touch of citrus (oranges or lemons?) signals that the finish is eager to make an appearance.

Finish: Lemon zest on the lips, followed by a fruity, honeyed composition that begs for another sip. Length is a tad on the long side of medium. To the experienced palate, a bit of graininess rears its uncoiffed head, not unlike a house guest on the fourth day.

The price tag for such a little bottle is, well . . . kinda steep. Nobody would contest the fact that Kininvie 23 Year Old Batch 2 is beautifully packaged and labeled, coming as it does in a very classy black satin box, along with various and sundry packaging to intrigue the eye, and invite the fingers to open, unwrap, and pull.

While this bottle of Speyside whisky from a rare, little-known distillery is a fairly smooth dram to sip, I might point out that Balvenie’s 21 Year Old Portwood Finish shares a few notable characteristics in the nose and on the palate. In my estimation, Ye Olde Balvenie is far superior–especially in terms of complexity.  I might also add that a 700ml bottle of Balvenie 21 Year Old costs about the same as the little 350ml Kininvie in the United Kingdom, with a steeper price tag for both in America.

As for The Kininvie, it’s a great little distillery now on my radar. I will be watching to see what sort of other little bottles tumble out of the Convall hills.