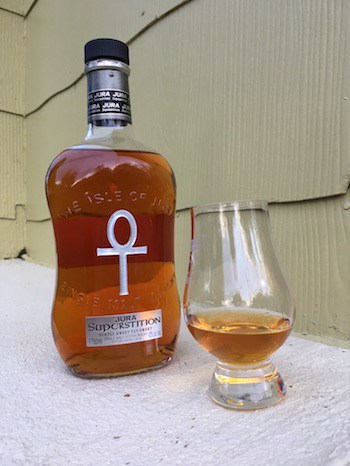 Of all the spirits and whiskies I’ve tried in my adult life, I’m not sure I’ve found a four-word product description so apt as that of Jura Superstition: “subtly sweet yet smoky.”

Read as a neutral statement, that essentially encapsulates the flavor profile of Superstition, a mildly sweet Scotch with a touch of peat smoke and some notes of tropical and earthy spices – pleasant and mildly interesting but not extraordinary.

Superstition comes from Isle of Jura, a Whyte & Mackay (Emperador) distillery named for the intriguing island on which it is situated – a rugged, sparsely populated place about 60 miles from Glasgow (overshadowed by its southwesterly neighbor, Islay) that George Orwell described as “the most un-get-at-able place” as he used it as a solitary retreat to write 1984, the distillery’s website boasts. They were proud enough of this fact to name a Scotch in his honor.

While Jura gives plenty of island superstition to accompany this whisky – such as the local belief that good luck will come from holding this bottle so that the Ankh, the Egyptian cross-like symbol of life emblazoned on the front, is in the center of the palm – practical information on the creation and make-up of this whisky is sparse.

Describing it as a “lightly peated,” Jura places Superstition on a delicate/peated side of its four primary products. Caskers.com describes it as being crafted from about 13 percent peated barley and the rest unpeated barley. It is aged in ex-bourbon casks and has no visible age statement, making it a non-age statement bottling.

Vital Stats: 43 percent alcohol by volume, packaged in a 750 milliliter bottle priced somewhere between $40 and $60 depending on the retailer and your location.

Nose: While peat surely makes its presence known in the nose, it is surprisingly subdued, largely taking a back seat to earthy but tropical aromas, starting with the smell of honey and oak and gradually growing to include notes of lemon, clove and sandalwood.

Palate: Hits the tongue with a smooth and sweet (if not viscous) drop of honey. After a couple moments, that begins to turn smoky and spicy. The smoke again is peaty but subtler than in the nose. While spicy notes of cloves, pepper and cinnamon take more dominance yet are still held in the check by the honeyed flavor base, with a touch of the citrus and wood notes. Swallowing leaves the spicy notes mingling with a touch of citrus in the back of the mouth and sweet coating over the center of the tongue.

Again, “subtly sweet yet smoky” pretty well sums up Jura Superstition. It has some tropical characteristics that give it some character, but it is by and large dominated by its honey-like sweetness and its spiciness, with varying degrees of peat smoke throughout the experience. It’s a smooth, solid whisky, but it’s not likely to blow you away with its complexity.