For most of us, a solid single malt has something of a magical quality to it. Had a rough day? Kick up your feet with a good book and a great Scotch and your night’s on the road to redemption. Got the winter blues? A glass of something peaty in front of the fire will warm you right up. For the scotch distillery Jura, though, the magic of whisky (or, at the very least, their whisky) runs deeper.

Based on the Scottish island of Jura, which they describe as, “a magical haven where a sense of solitude pervades: one road, one pub, one community, one distillery,” Jura has incorporated the theme of magic into the very bones of their business narrative. We’ve written up reviews about a number of Jura’s whiskys, their main lineup having such names as “Prophecy,” and “Superstition.”

Adding to that theme – and playing upon the legend of Saint Columba’s 6th century blessing of the island’s water supply – today we review another of Jura’s offerings: Elixir.

The Jura distillery was first founded in 1810, but like so many Scotch distilleries, saw its own share of bad luck. After falling into disrepair and being dismantled in 1901, the distillery was rebuilt and reopened in 1963 and has been brewing ever since. Released at the end of 2011, the Jura Elixir has been aged for 12 years before bottling – a bit longer then Jura’s 10 year aged line, but quite a bit less than their 21 year or 30 year offerings. Finished in, “a mix of American white oak and sherry casks,” they advertise the flavor on the bottle as “fruity and spicy.”

Now I’ve no doubt that visiting the island of Jura would be a magical experience in itself (so much so, that George Orwell chose the island as his writing spot for his literary masterpiece 1984… though on second thought, considering the dystopia he created, one wonders at the island’s potential influences…), but just because the island is a magical place doesn’t necessarily mean the land’s sole distillery can lay ownership of that same wizardry. For that, the only true test is to open up a bottle and pour out a dram. Check below to see if this Elixir is truly the stuff of the gods, or just another bottle of snake oil. 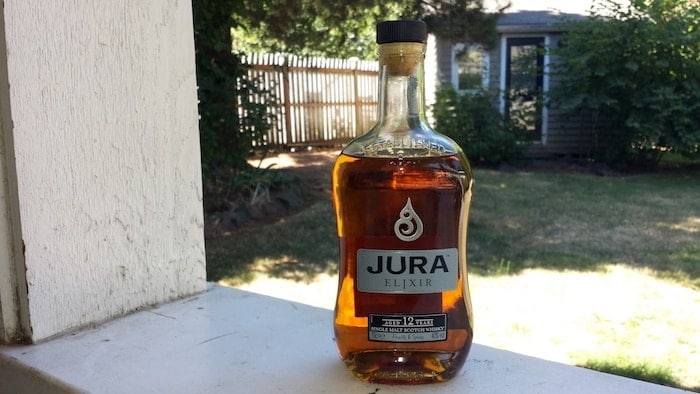 Vital Stats: The Jura Elixir Single Malt comes in at 80 proof, and is sold in a 700 ml bottle. Aged for 12 years, and distilled in Jura, Scotland, the Elixir is finished in American white oak and sherry casks. The bottle sells online for approximately $50.

Appearance: To start off with, I’ve got to say, I love the way the bottle looks. Jura found a great design balance that to me is both contemporary without falling down the slippery slope into tackiness. I particularly like the raised emblem placed on the front center of the bottle (a unique feature implemented in the design of many – though not all – of Jura’s offerings). As for the whisky itself, it’s a nice, rich amber in the glass, with thin, slow legs.

Nose: You can smell the sherry cask that the whisky was finished in… a sweet nose, with, yes, hints of sherry, as well as cherry and honeysuckle.

Palate: Really quite lovely. The palate starts sweet and fruity; a hint of overripe melon and a bit of blackberry. There’s a bit of spice there as well – cracked black pepper and clove – but neither the sweetness nor the spiciness becomes overbearing. It fades to the back of the mouth in a smooth transition, lingering briefly on the sweet end of the spectrum before leaving the palate with nearly no bitter aftertaste.

As far as I’m concerned, Jura lives up to its magical reputation! Is it the Saint Columba-blessed water? Is it Jura’s two-plus centuries of experience? Is it some straight-up witchcraft? I don’t know, and honestly, I don’t care! Jura’s made a fine single malt, sells it for a fair price, and I, for one, am happy to add it to my collection.