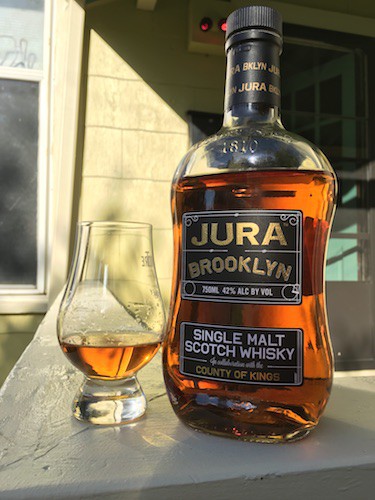 It would be quite a remarkable feat for a Scotch to be imbued with the flavors of New York City borough Brooklyn, or really for any spirit to carry the flavors of any place, for that matter.

Yet, despite a valiant effort, Jura Brooklyn Single Malt Scotch Whisky is just another Scotch, though an above average, if somewhat bland, expression of the category.

To that end, Tait gathered palates from 12 Brooklyn businesses such as Brooklyn Magazine, New York City Food Truck Association, Bedford Cheese Shop, Fine & Raw Chocolate, Brooklyn Brewery and others to weigh in on the final product.

Jura Brooklyn has been aged in American white oak bourbon, Amoroso Sherry and pinot noir casks. While it has no age statement on the bottle, we’ve reported in the past it has been been aged up to 16 years.

Nose: The initial sniff brings a firm but gentle waft of spicy smoke and sea salt, which is then pleasantly complemented by sweet, sour citrus, particularly orange and pineapple with a touch of honey.

Palate: Touches with the tongue with the flavor of a simple syrup. That sweetness sits in the mouth for a moment and then starts to turn spicy, but mostly in a way that is largely indistinct with just a touch of ginger and clove. That spiciness builds up until swallowed and finishes with a gentle smokiness that tingles the top and sides of the mouth in flares for another minute.

Very smooth and very subtle, actually a little too subtle for my taste, despite the fact that the Jura Brooklyn is billed to have notes of key Brooklyn flavors like coffee beans and the smoke of Brooklyn’s “infamous dive bars.”

Yet, while Jura Brooklyn goes down very smooth, it is largely lacking in flavors that would make it a dram to contemplate. Jura Brooklyn is solid, unobjectionable, and yet mostly characterless.