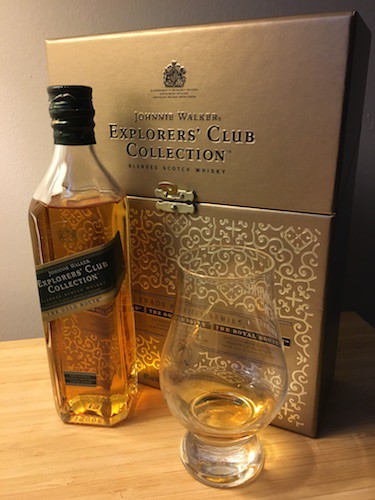 Reflecting on its journey to become one of the most well known producers of Scotch, Johnnie Walker’s Trade Route Series seeks to distill the experiences of the Walker family and their employees supposedly had while selling their whisky over nearly 200 years, from China to Persia to Peru.

Whether or not the Walkers or their agents actually trekked to all of those places to sell Scotch, even with the British empire to propel them, the series pays “homage to travellers of the past and present” with its three blends, all under the umbrella of Johnnie Walker’s Explorers’ Club Collection.

The Trade Routes Series’ three blended scotch whiskies are each named for a historical path of international trade: The Spice Road, The Gold Route, and The Royal Route, the three of which I have in a box-set of 200-milliliter bottles. I’ll be reviewing The Gold Route here and reviewing the other two separately.

From the small map on the box, it seems that The Gold Route starts (from north to south) around modern-day Belize, follows the isthmus of Central America south, cuts across the Andes Mountains of Colombia, winds south between the western Amazon region to the east and the Andes to the west, and finally ends somewhere around southern Bolivia or northern Chile.

Having seen a few pieces of that route myself, I can attest to the product description’s assertion that this path passes “magnificent scenery and deep, rich cultures,” though it seems a journey that would often be extremely difficult and remote, even in modern times, and hardly profitable for a Johnnie Walker agent for most of the company’s history.

Johnnie Walker doesn’t give many details on the creation of any of The Trade Routes Series blends, but does specify The Gold Route is a blend of aged whiskies (no age statement), matured in old American oak casks and comes in at 40 percent alcohol by volume.

The Gold Route and its two companion whiskies (as well as the fourth whisky in the Explorers’ Club Collection, The Adventurer) are only available in Duty Free stores. If the Explorers’ Club sounds familiar, you might be thinking of the New York-based club, members of which boast accomplishments of being the first to reach both poles, summit Mount Everest and walk on the moon. A New York judge blocked Johnnie Walker’s parent company Diageo (who also owns Smirnoff, Captain Morgan, Tanqueray, Guinness and Bulleit) from using the name.

The two sides eventually reached a settlement allowing Johnnie Walker to use the name in exchange for Diageo becoming a global sponsor and committing to work with the organization to “promote exploration and discovery.”

Vital Stats: Blended Scotch sold in a one-liter version of Johnnie Walker’s classic square bottle. No age statement, but aged in American oak casks. Only available at Duty Free stores for a suggested retail price of $95, but probably higher in actual stores.

Appearance: Golden amber that is pretty middle of the road for Scotch.

Nose: A complex blend of scents from the start, with an earthy, salty smoke that is contrasted by sweet, tropical fruity flavors of banana, mango and papaya, with a touch of cloves in between. That evens out into a sweeter aroma defined by vanilla.

Palate: Hits the tongue like a sweet, but earthy vanilla syrup. That sweetness turns to spicy flavors of cloves and nutmeg and a sweet, oaky smoke. That spicy, smoky character remains the distinctive flavor after swallowing, tingling around the mouth while the sweetness of a mellow coffee cake subtly emerges on the back of the tongue.

While I complained that The Spice Road’s flavors came in waves that didn’t intermingle, that criticism can’t be made of Johnnie Walker The Gold Route. The sweet first taste glides easily into a complex but sweet blend of spice and smoke that gradually gives back some ground to sweet at the end. While I wish the fruity flavor of the nose would have been more present on the palate, I appreciate the gradual, complex flavor shifts all the same.