Editor’s Note: This whiskey was provided to us as a review sample by Johnnie Walker. This in no way, per our editorial policies, influenced the final outcome of this review. It should also be noted that by clicking the buy link towards the bottom of this review our site receives a small referral payment which helps to support, but not influence, our editorial and other costs.

Well, yippee, Johnnie Walker has released an even cheaper entry level Scotch. It’s being touted as a nice one for making cocktails. In fact, the company has released a promotional cocktail kit that has just about everything, along with a 750ml bottle of Johnnie Blonde Blended Scotch Whisky.

These cocktail sets would make fun college graduation gifts, Christmas gifts, party favors, or birthday gifts. They seem as though they will especially appeal to twenty-somethings, or younger partiers (in countries where eighteen or nineteen year-olds are allowed to drink legally).

The box is quite large, with plenty of bright and colorful “eye candy” inside. When you open it up, a tightly packed assortment of cocktail paraphernalia seems almost childlike (in a good way). It’s got the same type of packing material as Easter egg baskets from when I was a kid in the 1980’s.

Johnnie Walker’s “Keep Walking” campaign started around the same time as Ardbeg’s now infamous 2014 Auriverdes advertising campaign. For those of you not in the know, that Ardbeg Day release was named after the Brazilian World Cup team. This caused some eyebrows to go up. Yeah, yeah, everyone knew the World Cup was being held in Brazil that year.

The big newspapers all went for it. So did the big magazines, and the big media. So, what was the problem? In my opinion, one year with a South American name (I know, I know, because of the World Cup) wasn’t a problem.

This said, when many people drink Scotch, regardless of their nationality or race, they like to think of Scotland, or at least the UK. Scottish whisky is not like Coca-Cola. It’s a very special beverage. Even the name “Scotch” contains the place where it was born, and where it continues to be made.

By way of contrast to Auriverdes, Highland Park has long embraced a Viking theme. Since the distillery’s campaigns and product design strategies first began, it has scored goal after goal, increasing sales exponentially. The public has embraced All Things Viking. Packaging and campaigns with Ancient North themes enhance the drinker’s enjoyment of a product which relies, at least some extent, on image and impression.

But why have Viking themes worked so well, and for so long? The reason is simple: it’s because Highland Park is located in the Orkney islands, which are the northernmost part of Scotland. Norway is just across a rather cozy stretch of Atlantic, a waterway that Longships navigated over one thousand years ago.

Under the very foundations of the distillery there lies sandy dirt upon which Vikings once lived. Not far from there, Medieval Northmen and Northwomen left behind a fair amount of art and artifacts. Indeed, Orkney islands are a rare place on earth where Viking progeny still live, many of whom are involved in the production of Highland Park whisky.

This year’s whisky release called Johnnie Blonde seems like an attempt to once again include drinkers from its loyal consumer base. Some of these folks may have felt alienated by “Keep Walking” advertisements that did not pay off in terms of attracting enough drinkers from other demographics–demographics which evidently still mostly prefer beverages other than single malt Scotch, despite the valiant efforts of Johnnie Walker’s management.

Johnnie Walker is one of the most recognizable labels in the world of whisky. The owner of a grocery store in 1820, John Walker started tinkering with blends because he didn’t own a distillery of his own. Fast forward to the present. Johnnie Walker blends are among the most famous on earth. The company is owned by Diageo, a multinational corporation that earns nearly 12 billion pounds a year. 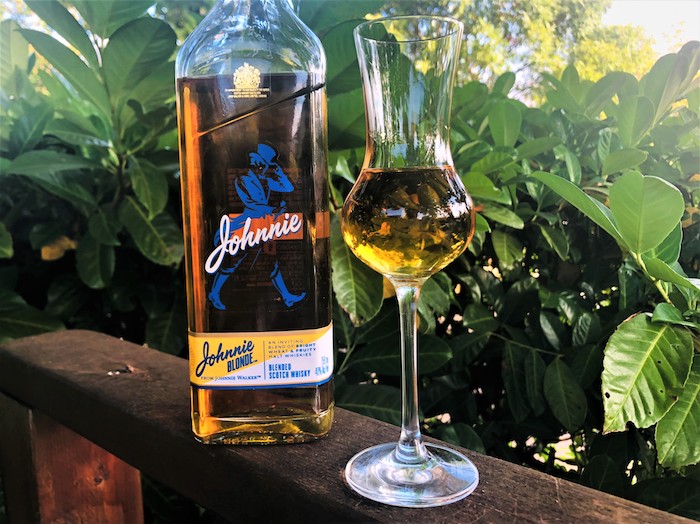 Palate: Asian pear; cooked rutabaga with butter; stroopwafel; gunny sack from a root cellar, cotton candy. A fairly short finish. The final note on the death is kind of a toss up between caramel, cardboard, and red berries, depending on how much oxygen is involved (length of time in glass). The longer this whisky sits, the more “berry-esque” it becomes, kind of like a Red Bull and vodka.

It seems the blondes of this world get a well-drink caliber namesake from Johnnie Walker. Yes, I know "blonde" is also a color without any connection to hair. This said, Johnnie Blonde is colored artificially, as are quite a few other Walker blends, which, in turn, are nearly the same color as this one (darker than blonde on the color wheel).

Considering how many blondes live in Scotland, one might have thought a whisky named "Blonde" would be of higher quality. Despite this fact, the blend is very competitively priced and fun to mix in cocktails. Something about this whisky tends to "cloak" it (in a good way) around stronger tasting ingredients, such as fruit juices and/or rum.

My wife and I had a great time experimenting with the Johnnie Blonde gift set in our kitchen. In closing, I've shared our favorite spontaneous recipe. My wife named it a "Blue Lulu." The name is an inside joke, so unfortunately I can't tell you its meaning.

Our recipe includes the following ingredients: Two parts Blonde; one part J. Wray Silver rum; enough Blue Curacao to change the color; pineapple juice (to taste); coconut water (to taste); Sparkling Lime & Yuzu (from Blonde's gift pack), a wedge of lime to garnish and rub along the rim of the glass, along with crushed ice. Shake the mixture like a Polaroid picture, and then serve.

Frankly, I like to use Clairin Sajous rum instead of J. Wray Silver, but the Clairin is harder to find and over double the price in my town.

My wife also likes to use the Wray & Nephew Overproof White Rum. It adds an interesting complexity that takes the cocktail in a slightly different direction from the J. Wray Silver, which is more straight forward with a vanilla finish. The overproof rum goes better with Johnnie Blonde, in my opinion. It has a very unique flavor that enables Blue Lulu to "take a walk on the wild side."