Highland Park has the distinction of being the northern-most distillery in Scotland. It’s located in the town of Kirkwall, which is the capital city of the Orkney Islands. Due to their northernmost location in Scotland, the Orkneys play home to all things Viking—from magickal stone monuments to burial mounds to museums filled with swords, axes, and armor from the ancient of days.

Perhaps that is the reason why Highland Park distillery tends to play up its Scandinavian heritage with all sorts of releases featuring the names of gods, warriors, and kings that once ruled this rocky fingertip of Scotland.

Svein (the whisky currently being reviewed) hails from Highland Park’s Warrior series, which was released for the travel retail market. This single malt Scotch takes its name from an infamous Viking chieftain known for his quick, fiery temper – as well as his generosity for those who pledged fealty. True to form, Svein whisky possesses both spiciness and sweetness, owing to the use of sherry-seasoned American oak casks for its maturation. 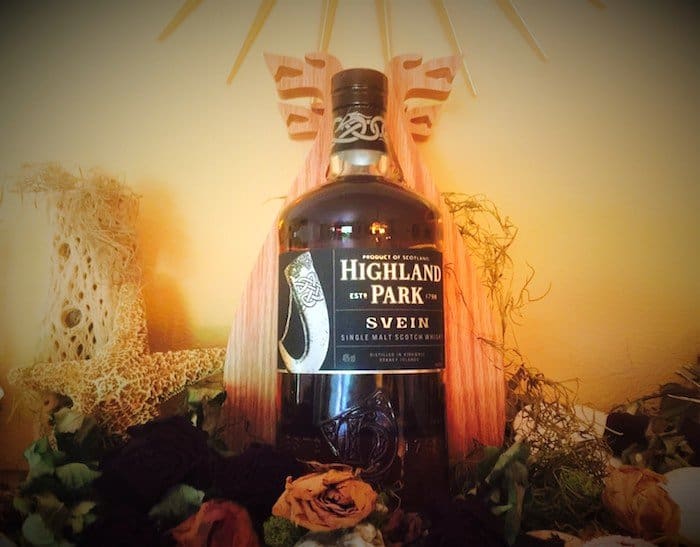 Appearance: Color resembles golden rays of Nordic sunshine in autumn. As for the whisky’s legs, they are hale and hardy of limb, but tend to run down the glass somewhat impatiently.

Nose: That signature Highland Park heather honey rises like a Viking prayer, along with whisps of peat smoke (burnt offerings to the gods?). With air, the whisky opens up to reveal a sweeter disposition that evokes fruity notes like orange zest, dried pineapple, and guava. There’s also a touch of medicinal eucalyptus.

Mouth:  Now comes Svein’s fiery temper. I’m getting a blast of peppery bitterness, although it doesn’t seem terribly oaky. No, the wood presence here is fairly understated. I think what I am tasting has more to do with some younger casks thrown into this very interesting batch of single malt Scotch. There’s a fairly understated malt presence, as well . . . just enough to gladden the palate. I would liken this to vanilla pudding, although Highland Park’s website uses the metaphor of creme brulee, which sounds a bit classier.

After the whisky’s initial mouth feel recedes, some bitter citrus notes comes through that weren’t in the nose. We’re talking about lemon pith, Granny smith apple peel, and grapefruit. A nibble of baker’s chocolate. And, lastly, some peat smoke. It’s nothing skull splitting, mind you. The “Goldie Locks Effect” most definitely applies to this dram. It’s pleasing for those who enjoy peat, without scaring off those who merely tolerate smoke in their tumblers.

In the finish, Thorin Oakenshield beats his chest. Metaphorically I’m alluding to wood tannin from American white oak. Perhaps there are some older casks in the batch? Who knows. Forest loam rises up, as well. Am I talking about geophagy (the compulsion to eat dirt)? Egad: trolls, crawl back into your holes. Rather, I’m referring to the way deep woods smell. Think camping, think hiking. In other words, “mountain air” on a misty, autumn day. One’s sense of taste and smell are linked, after all. At the death of Svein, a pleasing malt character resurfaces. Length of the finish is medium.

After pouring a few more glasses of Svein - past the "tipping point," halfway down my bottle--I realize the whisky is a tad smokier than at first I'd thought. This warrior sneaks up faster than a Viking axe man on a raiding party.

Would I snag a bottle of Svein, if I were at an airport overseas? Well, yeah...if the price were right. I doubt that I'd pay over $70, however, for this Viking warrior in a generous, one liter bottle. The travel market is a fickle thing. Sometimes, you find a real bargain on the shelf. At other times, you encounter unrealistic expectations: merchants who try to exploit a captive market of buyers, some of which have way too much time on their hands, in between flights and ferries.

3.5
User Rating 3.8 (10 votes)
Sending
24
Shares
972
Views
Share on FacebookShare on TwitterGet Our Newsletter
Cheers to the Dads! Personalize a bottle of his favorite whiskey to create a modern gift for the modern man. Use code: FATHERSDAY20 for $20 off your next order of $100 or more at ReserveBar