Editor’s Note: This whisky was provided to us as a review sample by Highland Park. This in no way, per our editorial policies, influenced the final outcome of this review. It should also be noted that by clicking the buy link towards the bottom of this review our site receives a small referral payment which helps to support, but not influence, our editorial and other costs.

The whisky coming off the Isle of Orkney is as classic a Scotch as you’ll find; the heritage, however, takes a different tack. Orkney has spent as much time in the Viking Empire as the British one, and the former holds as much if not more esteem than the latter. Viking heritage is still prevalent and culturally close to both the people and the distillery of Highland Park.

Highland Park goes back to 1798 (officially; whisky was distilled in a less-than-legal capacity beforehand) and is the northernmost Scotch distillery in the world. The Viking heritage of the isle is as important to the distillery as it is to the local Orcadians. They tie their Viking roots strongly  to their brand, in both bottle imagery and the naming of their products.

These ancient roots have added a modern perspective and consciousness. Highland Park has paired with Instagram account Scotch in the City to select this limited-release bottle. Kevin and Nick, who run the account, chose this specific cask from three un-identified samples sent to them. After some heavy debate, #150 won the day – an 11-year-old Scotch aged in a first-fill American oak sherry puncheon. As part of the project, some proceeds from bottle sales would be going to the The First Responders Children’s Foundation COVID-19 Emergency Response Fund (Kevin and Nick made no money from this release, nor from their account in general).

In mid-May Kevin and Nick did an Instagram live tasting of the whisky they chose (which can be viewed in the app) and a Q&A. Kevin and Nick opened with discussing the $15,000 the bottle sales had contributed to the fund. A “phone call” from Edrington (parent company of Highland Park) in the first few minutes doubled that number to 30,000. The live video went on to discuss the process of releasing this Scotch, how it compares to others, and some general questions about Scotch and the account.

Kevin and Nick want to continue selecting casks for limited release, as well as continuing to contribute to charity – hopefully one a year. In their closing words, they thanked Edrington and their work in charity, thanked and asked for consideration towards first responders and frontline workers, and dedicated this bottle to both them and the account followers.

They wrapped up the video with a few quick tasting notes on the bottle – caramel, sherry on the nose, fresh vanilla bean, peeled fruits, some tangy, zesty orange, and little heather-y peat at the end. They specially noted how the whisky changed from the first notes as they sipped, bringing out more latent elements.

Only 594 bottles of this limited-release Scotch were made available. As of the publishing of this review, a few bottles are still available on Caskers – so run, don’t walk if you want to participate in this very special expression. 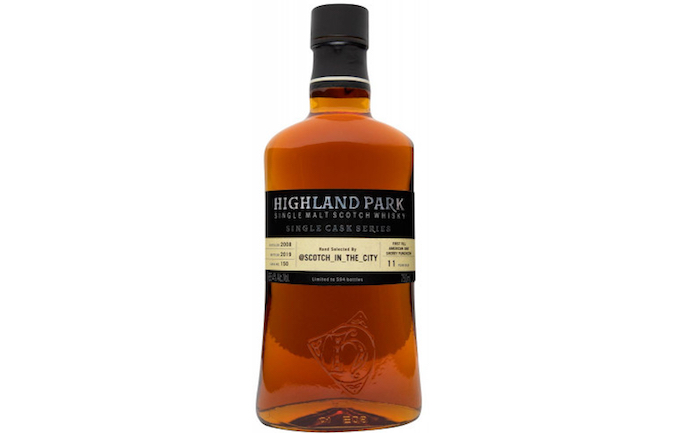 Nose: Very earthy and mossy at first whiff. As it sits, prunes and candied fruit come through, with a fine champagne on the end.

Palate: A light texture, but immediately hot, to the point of astringency. A hint of nutmeg expands into full, sweet marshmallow. A punch of ripe, juicy fruit tones down into herbal botanicals and artichoke, with a whisper of willow bark. This leads into the wonderful long finish where the sweet, flowery smoke shows up.

Oh my, this is a spicy one. As a general rule I never recommend this, but this pour needs to be a little watered down for even the first taste - for the sake of your tastebuds. But once you do - we reach the second “oh my.”

This Scotch has levels, and moves through them effortlessly. I didn’t get all of the same notes as Nick and Kevin, but I did agree that this changes and grows as you drink. This collaboration has absolutely been a success, in terms of both aid and taste, and I’ll be waiting eagerly to see what comes next.