Editor’s Note: This whiskey was provided to us as a review sample by Golden Gate Whisky. This in no way, per our editorial policies, influenced the final outcome of this review.

Mizunara oak is a rare and expensive tree native to Japan. During the Second World War, Japan’s import market was limited. The nation’s whisky industry found the solution for a desperate situation by fashioning mizunara wood into casks.

The tree must age 200 years before being harvested, seldom grows straight, and is highly porous. It was not the first choice for the industry but saved the spirit makers during those hard times. After the war, Japanese whisky makers returned to American oak barrels.

So, why is this oak making a splash in the American whisky scene? Whisky aged in mizunara casks absorbs the unique aspects of the wood, including the high levels of vanilla, and also infuses the aged whisky with an exotic spiciness.

The Golden Gate Whisky Co. has paired with the Standard & Strange brand to develop the Mizunara Single Cask Whisky that I sampled for this review. It is a…strange…pairing because, from what I can tell, Standard & Strange specializes mostly is clothing and footwear. Nevertheless, the output is a special and really odd whisky that I am still thinking about.

For the Mizunara Single Cask Whisky the Golden Gate Whisky Co. used regeneratively grown heirloom barley and rye. It was grown, malted, and distilled in California and aged for twelve months in the Japanese wood. The grains are floor malted, a rare practice in mainstream whiskeys.

I have never tasted a whisky like this. Both in the bottle and out, the nose was overwhelming. I was flooded with images of farmland and dusty earth. I am unable to think of any other whisky I would comp with this one. The unique flavor profile and potent notes of hay and honey add an intense piquancy to the sipping experience.

There were only around 250 bottles of this edition, and I wonder if the whisky community will accept this variation with open arms. 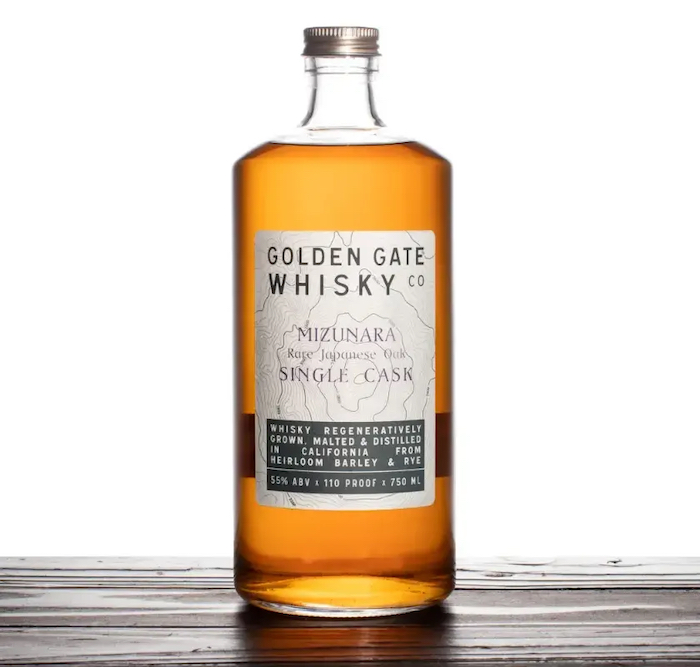 Nose: What a trip this was. I got the barley immediately, followed quickly by hay, agave, bark mulch, and dusty earth.

Palate: At first taste, I felt that this was no regular whisky. It is slightly sweet, sugary, with the Japanese oak coming through midway. I got honey, tobacco, and fennel coated in sugar. Then a peppery finish with traces of snap pea.

I place this whisky in a category of its own. I appreciate the environmentally conscious practices of Golden Gate Whisky Co., but am confused by the collaboration between the two businesses that conceptualized the whisky.

The tasting was an exploration of my own palate. I can’t say that I’ll sip on Mizunara Single Cask every night, but it will be a fun one to share with my whisky-loving friends to get their take on it. With only 250 bottles produced, if you want something different, give it a go.