Editor’s Note: The Whiskey Wash welcomes Will Meek to our reviewer team!

Golan Heights Distillery is an upstart project in Israel that has just released one of the first whiskies from that country. The terroir of the Golan Heights region of Israel – a northeastern territory with crystal clear spring water, stunning plateaus, and volcanic soil – inspired founder David Zibell to set up shop.

Israel is not the first place most people associate with craft beverages of any kind, let alone high-end spirits. However, the landscape is changing, particularly in the urban centers of the country. This has led to much greater demand for craft beer, locally produced wines, and yes, whisky. 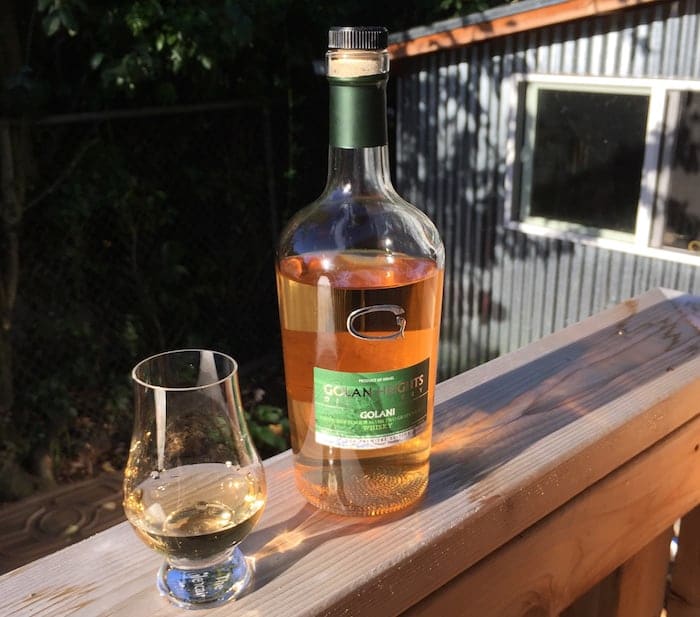 image via Will Meek

At time of publishing, there are three distilleries in Israel. Milk & Honey was the first to distill grains that will become whisky in Israel, but that product is still aging, which has led Golan Heights to be the official first bottle release from the country.

The label refers to this bottling as “Three Wood Sour Mash Two Grain Israeli Whisky.” The grain bill is barley and wheat, which is then distilled in copper. There is no age statement (not a legal requirement in Israel), although previous press suggested this is aged for “no longer than a year” in new American oak, cabernet oak, and chardonnay oak casks.

On first pour, its youth is noticeable in how light in color this whisky is. It has the presence of a white wine, or light lager beer. The nose is subdued, but has the character of raw whiskey and a hint of bark.

Moving it around the glass left it clinging more than I expected, which leads to the real standout thing about this pour: the mouthfeel. It is very smooth, with only mild flickers of heat around the tongue. Some people may find it a touch thin, but I found it very pleasant given the age.

The mouthfeel invites return visits, and the flavor profile is quick burst of oranges, light charcoal, and some candy sweetness, that disappears quickly into a dry finish. A splash of water takes the heat completely away and makes it a very easy and casual drink. The entire presentation grew on me over several pours, and this could be a great summer porch sipper, or mixer for bright cocktails.

Overall this is a pleasant offering especially considering the age, quaffable and un-distracting during an evening with friends, and would be good for citrus-focused mixers that need an unthreatening boost and a touch of charcoal.