I love when whisky paints a picture or tells a story – maybe about the distillery or, better yet, the region it comes from. It might come from the bottle itself, the aroma of the whisky, flavor notes or something else entirely. With Scotch, comparatively speaking, I find I am often more easily transported to Scotland before the spirit even touches my lips.

Scotland’s Speyside region is particularly synonymous with scotch, and has been home to The Glenrothes since its establishment in 1879. Among other whisky traditions, The Glenrothes has a highly-regarded line of single malt scotch vintage releases, which now includes the recently-launched Vintage 2004 expression. This is the newest in the series since its Vintage 2001.

In a press release, the distillery shared:

“All of the Glenrothes single malt is Vintage malt — whisky distilled and put in cask in a single year, then bottled as either a Reserve or Vintage when judged to be at its peak of maturity, character and flavor. At The Glenrothes, maturity matters more than age. Just 4 percent of the distillery’s capacity is released as single malt each year, ensuring that whisky lovers receive the best of the best. A combination of many factors, including an unusually slow distillation process in tall copper-pot stills, maturation in exceptional oak casks and a commitment to both craftsmanship and sustainability, delivers expressions with unique personalities and complex, well-poised balance.”

Distillery Manager Alasdair Anderson further described that “The Vintage 2004 is among the best I’ve tasted, with a real sweetness from the sherry casks adding the signature fruity Glenrothes spirit.”

This expression was quick to generate buzz, and was awarded a score of 94 points at the 2018 Ultimate Spirits Challenge. 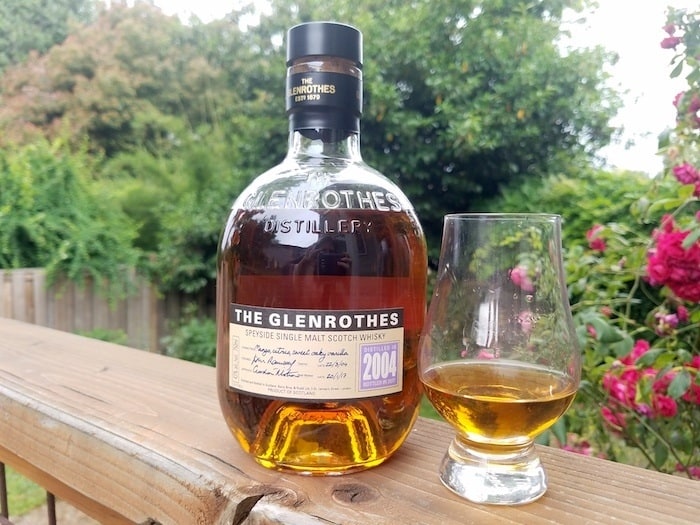 Vital Stats: This expression was at The Glenrothes distillery in 2004, filled in American oak Sherry seasoned casks to mature for 13 years, and bottled in 2017 at 43% ABV. The distillery describes it as “highly collectible,” with 3,150 bottles released in the U.S. – retailing for $65 (for 750 mL).

Nose: Tropical and honeyed sweetness, and brandied cherries with ash lingering in the background.

Palate: The mouthfeel is surprisingly slick and creamy, yet lighter than expected. There’s butterscotch, vanilla bean, oak and baking spices, and a roasted savory quality to balance the sweet. The finish is rounded out with an earthy, subtly cacao smokiness (markedly different from and milder than peat).

The American oak Sherry casks imparted a sweetness and nuttiness that makes for a brighter and lightly sweeter scotch that is lovely -- it offers a chance for other elements of the whisky to come through without being weighed down or overshadowed with peat or any heaviness. For single malt lovers as well as drinkers who may typically veer away from scotch that's too smokey, it offers something interesting and easy to sip.