The history of the Glenglassaugh distillery in Portsoy, Scotland, is as rocky as the terrain that surrounds it. Opened in 1875, the small distillery located on the Moray Firth Coast in the northeast of Scotland did its thing for decades. Then the eighties happened (the world collectively sighs and shakes its head). In addition to questionable fashion, brutal politics, and a lot of mediocre music (easy! easy! Just an opinion!), the 1980’s also marked a very rough time for the Scotch whisky trade. Glenglassaugh in particular felt the brunt of that commodity recession, and closing it’s doors in 1986 became one of the industry’s “lost distilleries.”

But, as things often do, the tides have changed. Now whiskies from those lost distilleries can sell for thousands. And Glenlassaugh, purchased by the Scaent Group in 2008, has experienced their own phoenix-esque rebirth. In addition to putting back on market some of their older stores, the distillery has been busy crafting new spirits. Well aware of the power of a good narrative, they named first new release after reopening “Revival.” And, in 2013, riding that narrative wave, they debuted Evolution, which is what has brought us all here today.

Evolution, matured in “first fill ex-George Dickel” Tennessee oak barrels, was released as a one-time offering of only 6,000 bottles. We’ve had pretty good experience with George Dickel products before, so hopes are high for this one. And, with my sample bottled at a staggering cask strength of 57.2% abv, at least I know it’ll give me a hefty buzz for my buck if nothing else.

In the pre-1986 past Glenglassaugh whiskies were often used as blends for bigger brands like Cutty Sark and The Famous Grouse – and while they have a couple of older barreled release available for sale, Evolution marks the second of three “new era” offerings from the company. With that in mind, let’s take a taste and see whether any of that nuanced century-plus history has made its way into this Glenglassaugh’s newest evolution. 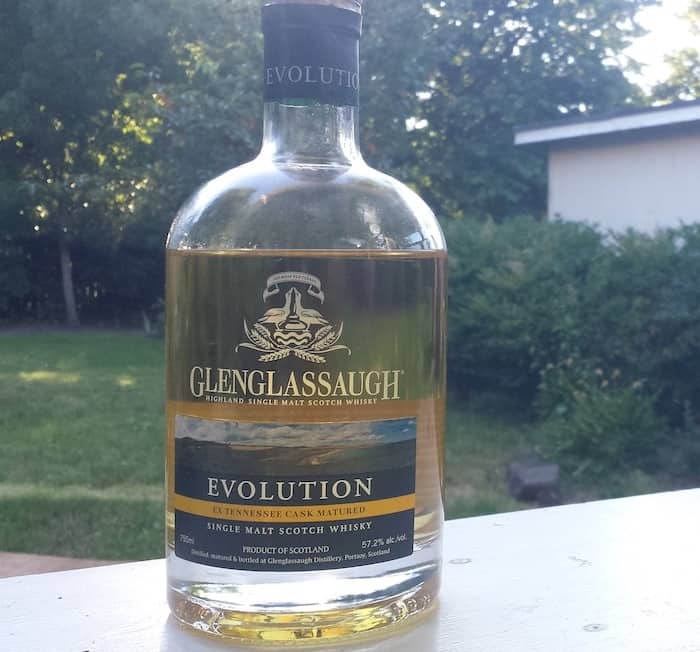 Vital Stats: The Glenglassaugh Evolution Single Malt is sold in a 750 ml bottle, distilled, matured, and bottled in Potsoy, Scotland. The cask strength comes in at a heavy 114.4 proof, and is sold at cask strength. The whisky has no age statement, but considering the distillery reopened in 2008, and this was released in 2013, you’ve got a pretty defined window there. It retails for between $55-$65.

Appearance: Priding itself as bottled “at natural strength, natural colour and without the use of chill filtration,” the Glenglassaugh Evolution is a pale – almost watery – honeysuckle in the glass. It has slow, medium-width legs.

Nose: The first whiff leaves no doubt that this is a high-alcohol spirit. After the sharpness passes, there’s a sweet nose with a hint of yellow raisins, cantaloupe, and milk chocolate. But man, those fumes will get you.

Palate: The palate starts off sharp – you can taste that 57.2% abv – and sweet, running down from the tip of the tongue before settling in the back of the mouth. There are definitely some oak notes, with hints of coffee, cherry cough syrup, and honey. It finishes with a burst of sweetness tampering out to a mild, slightly bitter aftertaste.

Everyone loves a good comeback story, especially one that involves surviving the 80's (sorry, sorry!). Unfortunately, I can't say that Glenglassaugh has nailed the Hollywood finish here that I had hoped for them. After years in the background, even if it was under different management, one might hope that with this new offering they would return triumphant to the playing field. I'm just not seeing that with this offering.

Certainly, with age things might be different. Some water helps with that alcohol bite and bitterness, but for this review it's about how the whisky stands alone. For the price, you could certainly do worse, but for the return of a Lost Distillery, I must admit, I wanted something more.

3.5
User Rating 4 (1 vote)
Sending
2
Shares
2k
Views
Share on FacebookShare on TwitterGet Our Newsletter
Cheers to the Dads! Personalize a bottle of his favorite whiskey to create a modern gift for the modern man. Use code: FATHERSDAY20 for $20 off your next order of $100 or more at ReserveBar