Editor’s Note: This whisky was provided to us as a review sample by Glenfiddich. This in no way, per our editorial policies, influenced the final outcome of this review. It should also be noted that by clicking the buy link towards the bottom of this review our site receives a small referral payment which helps to support, but not influence, our editorial and other costs.

Have you ever wondered why Scotch is predominantly aged in ex-bourbon barrels? Dr. Bill Lumsden of Glenmorangie breaks it down for two reasons. Firstly, the Scots don’t tend to like new wood, so the first-filled barrels lend to the slow maturation process of the whisky. Secondly, American oak is sympathetic to the flavor profile in single malt, whereas European oak has more tannins and a lends resinous flavor.

Kelvin Cooperage has been operating since 1963, however, not always in Kentucky. The cooperage’s origins are in fact Scottish. Once resting on the banks of the Kelvin River in Glasgow, Kelvin Cooperage located to Louisville to take advantage of the proximity to the bourbon producing hub. It aims at producing the finest American oak barrels for delicious whisky like the Glenfiddich 14 Year Bourbon Barrel Reserve.

We first reviewed the U.S. exclusive Glenfiddich 14 Year Bourbon Barrel Reserve over four years ago, so let’s see how it compares this go-around… 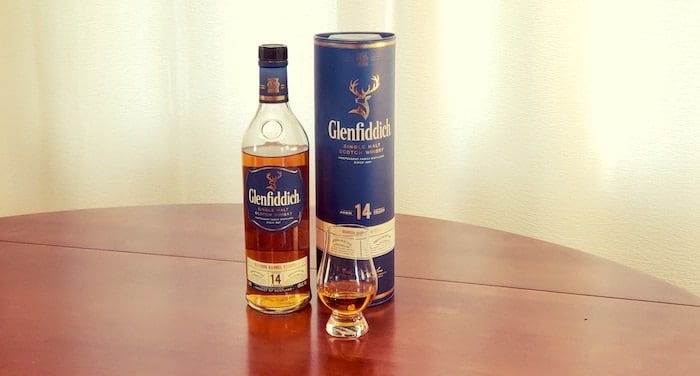 Nose: The recognizable aroma of fresh, warm butter toffee stands out first. Graham cracker and toasted marshmallow peek through with rich cocoa nib. I’m reminded of sitting around a campfire making s’mores. Near the end, bright bursts of cinnamon from a spice jar mingle with mellow candied orange peel and fresh citrus zest.

Palate: The mouthfeel is incredibly creamy and soft. The toffee is the showrunner, but cinnamon is there to spice things up. On one hand, there is fruit, but on the other I cannot discern what type, or types. Weak instant black coffee and cocoa powder fills out the middle. For the finish, there is faint Mexican vanilla. Dry oak stays on the tongue in the aftertaste.

The mouthfeel and the nose are divine...quite incredible really. I could spend a whole evening inhaling the Glenfiddich 14 Year Bourbon Barrel Reserve. The cinnamon on the palate along with the slight bitterness from coffee and cocoa can be too much at times, but overall it is a fantastic whisky.

Bourbon lovers, even rye drinkers, will appreciate this. The new deep charred American oak barrel finish provides more flavor than if the whisky was solely aged in ex-bourbon barrels.

4.5
User Rating 2.81 (205 votes)
Sending
83
Shares
31.2k
Views
Share on FacebookShare on TwitterGet Our Newsletter
Cheers to the Dads! Personalize a bottle of his favorite whiskey to create a modern gift for the modern man. Use code: FATHERSDAY20 for $20 off your next order of $100 or more at ReserveBar