For fans of grand cru whiskies like The Macallan, Dalmore, and Glenfarclas, the GlenDronach offers a similar experience of richly sherried, full-bodied malts with a sense of opulence and gravitas, skipping only the fibrillation-inducing price points (well, sort of—more on that later). And with several releases now making their way to American shores on a regular basis, we can all look forward to getting on better terms with this remarkable distillery.

Some background: The GlenDronach Distillery was originally founded in 1826. Just like women’s fashion and the recorded music industry, the late 1990s and early 2000s were tough for GlenDronach. It was mothballed in 1996, only to re-open in 2001 under Allied Distillers. In 2006, Chivas bought it, and then in 2008, whisky fairy godfather Billy Walker picked it up to add to his growing BenRiach Distillers portfolio. Today, it’s owned by Brown-Forman. Just like at its sister distilleries, BenRiach and Glenglassaugh, product development at GlenDronach is overseen by master blender Rachel Barrie.

Earlier this year, GlenDronach released a series of upscale special releases, including the 24-year-old Grandeur (all its age-stated single malts have fancy names like that) as well as several single barrels. I got the chance to taste some of these bottlings, and well, if you haven’t gotten to know GlenDronach yet, hurry up. Judging by the manufacturer’s suggested retail pricing on these bad boys, the days of the GlenDronach being the poor man’s Macallan appear to be numbered. 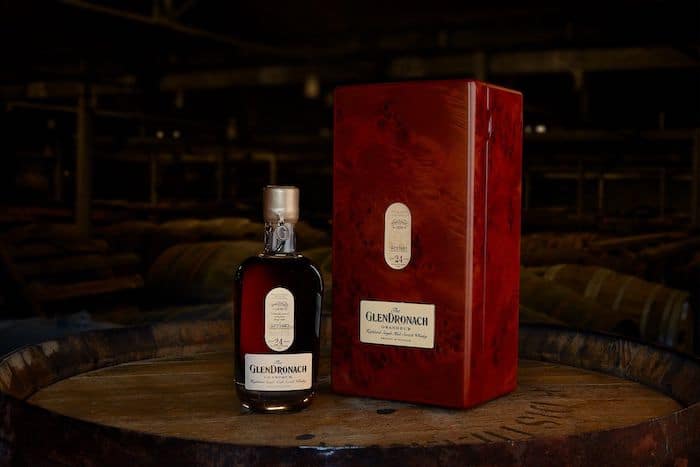 Nose: Rich waves of vanilla bean, antique furniture, oolong tea, leather, candied citrus, and sugared nuts. A shy but enticing nose – you could call it coy, even. Sherry is clearly present, but not overwhelming or overly sulfuric, although there is just a touch of struck match. Lovely.

Palate: Hmm…the palate’s not quite as lush as the nose. My first impressions are more austere, with firm tannin, dusky oak, tart citrus, and pomander. The mouth feel is on the lean side, amplifying the heat and oak. There’s a long, warming finish with toasty nuts and dates. Not as rich as many of the other GlenDronachs I’ve sampled.

Final thoughts: This is a very nice whisky, but it doesn’t quite show the power I know GlenDronach is capable of.

Nose: Lively, dense, and funky, with a weird tropical thing going on. There’s chocolate-coated banana, dried mango, and super-ripe cantaloupe along with the classic trifecta of sherry, oak, and toffee. Savory soy sauce and mushrooms are there, too, with a touch of acetone and sulfur adding an odd twist.

Palate: Again, there’s a thread of acid here I don’t find wholly unpleasant, although it’s definitely jarring. I do notice a touch of peanut brittle, a flavor I tend to associate with GlenDronach, plus some fresh orange wedges, prunes, and dry cocoa powder. Really, it’s almost rum-like. The finish is acidic enough to be mouthwatering, reminding me a little of baijiu or mezcal.

Final Thoughts: Odd! Youthful. Wild. Contemporary. Interesting but strange. Not a lot of age character. Might be fun for the deep nerds but also hard to imagine this is what everyone is looking for in a GlenDronach single barrel.

Nose: Rich, luscious, and cognac-like. Leather, prune, ancient oak, honey, and a surprising hint of fresh green melon. It’s much more integrated and less vaporous than the other two whiskies, with sweeter tones and a seductive feel.

Palate: So nice, and much closer to my mental image of GlenDronach. Super lush, peanutty, and brandy-like, with dense dried fruits, cigar tobacco, Brazil nut, weathered leather, and burnished wood. The super-long finish has a touch of rancio savor and leaves your mouth feeling tingly and alive.

Final thoughts: Definitely a crowd pleaser, albeit for an affluent crowd. There’s nothing to quibble with here – this is a very delicious whisky.