Editor’s Note: This whisky was provided to us as a review sample by Glendronach. This in no way, per our editorial policies, influenced the final outcome of this review.

I had never heard of Glendronach before, but with a name like Grandeur to go with it, one can’t help but be curious. Then the research and homework began and I became more intrigued with the story and the Scotch whisky.

The story begins as a house in Scotland called Boynsmill in 1771 and upon becoming a distillery in 1826, had changed the name to Glendronach. Over the years, the distillery has changed hands several times before eventually shutting down in 1996. In 2002, Glendronach re-opens and production begins anew. Eventually, in 2008 the Benriach Distillery company takes over and the group is later incorporated into Brown-Forman. So that’s a little history for you.

The current master blender at Glendronach and its sister distilleries Benriach and Glenglassaugh is Dr. Rachel Barrie. Dr. Barrie was recently inducted as a Keeper of the Quaich, a close-knit society of leaders in the Scotch community throughout the world. She knows what she’s doing too, having been in the industry for over 27 years.

The Grandeur is an avidly sought after whisky. It is a very limited release with 2,293 bottles of Batch 10 going out worldwide, and just 240 of those coming to the United States at a cost of around $700 each.

“Quietly maturing for over 27 years in the dark of our dunnage warehouses, The GlenDronach Grandeur Batch 10 is undoubtedly a superb expression and a fantastic representation of the smooth, complex and full-bodied style that The GlenDronach Distillery is famous for,” said Barrie of it when it was launched. 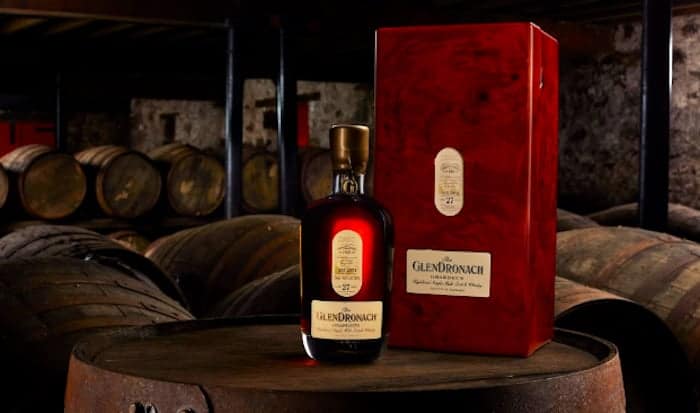 Nose: Complex and quite pleasant. Honeydew melon giving way to green apple, with a definite sherry presence in the background.

Palate: A lighter body than expected, but the flavors show through well. I detected notes of smoked honey layered with orchard fruit and that signature sherry sweetness. The 100.2 proof gives over a touch of heat that enhances the brighter flavors in the whisky. The finish was a bit tougher to nail down, but came up with a light nuttiness along with baked bread.

This whisky was a treat and a delightful tasting experience. I could sit around and just nose it for a good long while. I enjoyed the layers of flavor, balanced with a sort of bright heat that seemed to bring everything together.

If you can track down a bottle and can afford it, this is definitely on the recommended list. I am still somewhat new to Scotch whiskys of this caliber, but I know a good thing when I encounter it.