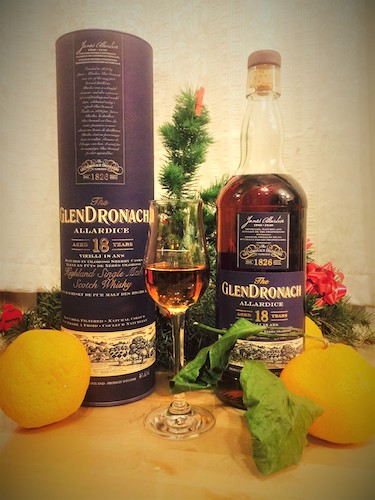 “Allardice,” the namesake for the 18-Year-Old Glendronach under review, comes from “Allardes,” which is the last name of the founder of this fine Highland distillery.

It’s hard to believe that GlenDronach opened its doors way back in 1826. That’s almost two hundred years ago! On that same year, the internal combustion engine was first patented. Ludwig van Beethoven was composing his famous scores. And, last but not least…in Huntly, Aberdeenshire, Mr. James Allardes was busy at work perfecting the fine art of distilling single malt Scotch whisky.

A bottle of very old whisky can literally serve as a time capsule, at least for whisky makers. For example, in 1975 at Aberlour distillery, workmen who were replacing a whisky still unearthed an old bottle of Scotch that was wrapped in a newspaper from 1898. The broth inside had obviously been aged in a first fill sherry cask, and this insight helped to create what eventually came to be known as A’bunadh.

Today, “sherry bomb” is common to whisky nomenclature. However, if that very old bottle at Aberlour had never been unearthed, the lost art of aging spirit in first-fill sherry casks might never have made such a dramatic comeback.

Unlike quite a bit of whisky these days, I really do think James Allardes would appreciate what his flagship, Glendronach Distillery, is producing nearly two hundred years after he first opened its doors. A lot has changed since then, but not his fruit-forward style of whisky.

Appearance: Burnished mahogany. The legs are nice and oily, with phat beads that stroll down the sides of your glass at their leisure. Oh yeah. This one’s a big boy.

Nose: Oloroso casks immediately come the fore, with dates, prunes, and raisins. Powdered chocolate. There’s also a subtle yet savory thing going on here, which reminds me of rich meaty juices from a bison steak, and perhaps a hint of bone broth.

Now comes a charming dairy note that smooths out the fruits in a swirling mandala…and yet, the dairy has a sour cream edge, helping to restrain sugar plum faeries’ “sweet nothings,” which might otherwise outstay their welcome on the tongue. Any wood presence is restrained here, offering a diminutive dose of nut fruits (yes, nuts are indeed a kind of fruit). Brazil nuts, to be precise.

Thankfully, any gun powder presence that I’ve tasted in older bottlings of Allardice is absent. Not a big fan of sulfur. I also believe GlenDronach has improved on some older bottlings, which fell slightly flat. It goes without saying that this dram evokes a lively, festive quality, imparting alegría de la vida at 46% ABV.

Palate: As expected, dried sweet fruits–dates, figs, raisins–assert themselves with all the gusto of high quality Spanish casks. Yum. Or is it rum? Yes, the fruits do seem as though they’ve been drizzled with black strap rum. Never a dull moment, as the plot thickens, offering a decadently oily mouth feel.

Granted, this dram may not be the Mohammed Ali of sherry bombs, but it is most decidedly a heavy weight, and it comes out swinging. The transition from sweet dried dark fruit notes, into a mixture of wood tannins, is truly delightful: allspice and cumin join the party, along with powdered milk chocolate.

Again, the complexity here is not mind-blowing. When compared with GlenDronach’s 15-Year-Old and 21-Year-Old OB’s, the Allardice feels somewhat laid back, and creamy.

Finish: Medium in length. Fruit and spice lingers without any notable heat, which is to be expected at forty-six percent; however, I’ve tasted far “hotter” drams at the same ABV that blasted my tastebuds unpleasantly. Yes, there is fruit cake (what Scottish whisky critics term “Christmas cake). As for the death, I’m happy to report that powdered chocolate is the last flavor to give up the ghost.

As you might imagine, GlenDronach’s 21 Parliament is more complex than the 18-Year-Old bottle under consideration, and also a touch more graceful, with a longer finish. The nose is admittedly deeper, richer, with far more subtle nuances, and some wood presence. Allardice, on the other hand, sees fit to lactate a creamery note, with lovely hints of multi-faceted Oloroso sherry, albeit with a very laid-back wood presence that’s hardly noticeable.

My bottling of Allardice conveys an unapologetic, full bodied potency that creates an oily mouth feel. Yes, indeed. A pure malt essence comes through in a way that is noticeably lacking in the Parliament, which retails in the United States for about $180. Is this older single malt worth the extra $40-odd dollars? Well, perhaps. Check out my October 7th review, and decide for yourself. (The bottle of Parliament that I currently have open was bottled on September 23, 2015.)

It’s also worth noting that Parliament displays more of a conspicuous alcohol presence, especially after a few sips, despite putting on airs of sophistication. Yes, its ABV is a few points higher, but I don’t think that is the deciding factor. There is a faintly cloying, spirited element in Parliament that was mostly absent from single cask Oloroso and PX bottlings a few years ago–many of which expressed even less of an alcohol tang at a higher ABV than anything in GlenDronach’s core range.

Glendronach 18-Year-Old Allardice bewitches one’s palate with a nice, full-bodied, syrupy mouth feel. Only high quality Oloroso casks are capable of delivering this sort of satisfaction, without the sugary-sweet “overkill” that PX casks sometimes produce. Due to my experience with single cask releases, I can say with some measure of confidence that Oloroso wood is ideally suited to bring out the bawdy side of GlenDronach’s distillery character. I certainly don’t regret owning a bottle of a nearly full 18-Year-Old Allardice, and I look forward to buying the 2015 release, as well.

In these trying times, when older whiskies are becoming few and far between, 18 years spent aging in high quality Spanish casks is something of a luxury.