Editor’s Note: This whiskey was provided to us as a review sample by Cascade Hollow Distilling Co. This in no way, per our editorial policies, influenced the final outcome of this review. It should also be noted that by clicking the buy link towards the bottom of this review our site receives a small referral payment which helps to support, but not influence, our editorial and other costs.

One of my benchmark flavors in whiskey (or whisky, in this case) happens to be Dickel Rye. Getting the chance to dive into a bit of Dickel Bourbon is an interesting contrast, especially if it is a new addition to the Dickel lineup such as this 8-year-old, small batch release.

George Dickel whiskies have been around for a long time, with George’s relationship with Cascade Hollow Distilling Co. dating back to the late 1870s. His reputation for smooth spirits continued as his brand grew. To this day, the company still chills the whisky before it goes into giant vats for the Lincoln County Process, due to the fact that George preferred to make his whiskey during the winter months, claiming a smoother outcome. The company has survived the decades and even managed to stay open during Prohibition, snagging a permit to produce “medicinal” whisky.

These days, the company is producing rye of varying levels, a white whisky, and a strong variety of well-aged and select spirits. Their most recent offering slotted to be a regular bottling is the George Dickel Bourbon. So how does this new addition stand up to their own traditions, let alone other bourbons on the market? 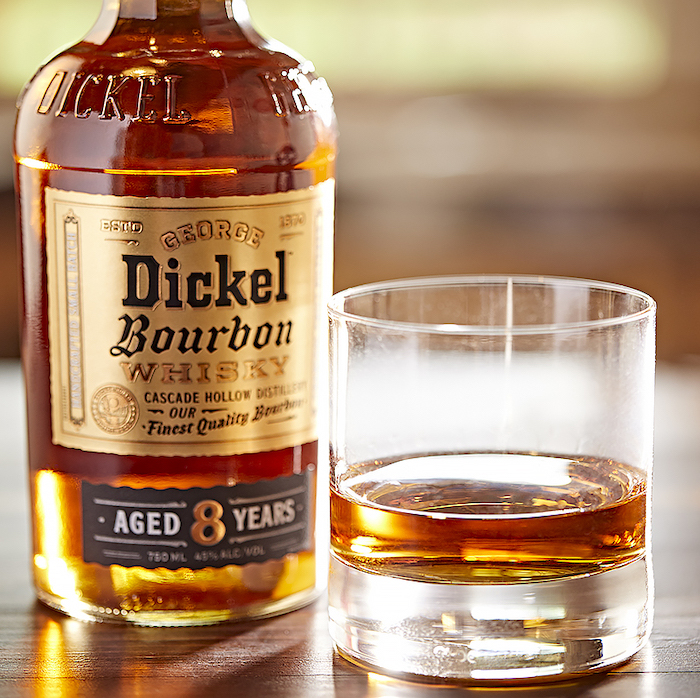 Vital Stats: This whisky is 90 proof and aged eight years. It is cold chilled and charcoal filtered, and has a price point around $32.00.

Appearance: Golden amber with a sheet of viscosity that sheds down the side in even legs.

Nose: Red apple and a sugary sweetness akin to sweet tarts hits the nose first. There is a wide assortment of baking spices, such as clove and cinnamon, plus a hint of black pepper on the back of the nose. It all comes together with a scent reminiscent of cinnamon sticky buns.

Palate: The heat comes on first but, just wakes up the palate instead of dominating it. It is present through the whole experience as a gentle prickle on the tongue. There is a sweetness on the front of the tongue like raw cane sugar. This is followed by spicy notes of black pepper and clove. It is well balanced and has just a hint of saline and mineral undertones that aid in the depth of the beverage. Over ice, the oak qualities came forward. The heat calmed to a warm blanket instead of a sharp bite. The spicy notes were still there, and the sweet elements were toned down a bit as well. It’s like drinking a caramel sticky bun made with a savory dough.

In my opinion, Dickel has presented a thoughtfully blended sipper that, with or without ice, is an excellent addition to the bourbon line up. I Definitely preferred it with ice, but either way there is a lot to talk about and enjoy in this glass. Also, with a reasonable price point and strong flavor profile, utilizing this in an Old Fashioned is not only recommended, but will satisfy most, if not all, connoisseurs of bourbon.