Editor’s Note: This whisky was provided to us as a review sample by Dewar’s. This in no way, per our editorial policies, influenced the final outcome of this review.

Flavored whisky is on the rise, that’s why Dewar’s wanted to bring smooth Caribbean flavor to Scotland for the first in a series of double-aged cask finishes. They are hoping to capture a share of the market that is drinking Fireball and honey flavored whiskey. Dewar’s wants to renew interest in their brand as well as entice new excitement for whiskey and whisky in general.

To make Dewar’s Blended Scotch Whisky Caribbean Smooth, Dewar’s creates a blend of “up to 40” individual malt and grain whiskies, all at least eight years old; the blend is then double aged, and finally finished for six months in ex-Caribbean rum barrels, adding even more to the already smooth finish.

“The rum casks were sourced straight from the Caribbean and brought to our ageing [sic] warehouses in Glasgow to be filled with our flavorful 8-year-old blend,” said Brian Cox, vice president of Dewar’s Scotch Whisky North America, at the time of its release. “The first in a series of double-aged cask finishes, Dewar’s will continue to bring these new and exciting flavor profiles to a broader market in order to drive renewed interest in our brand, and thereby the whisky category.” 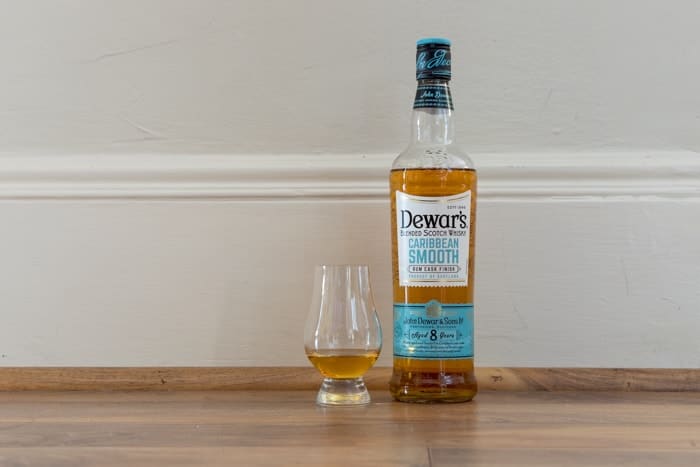 Nose: There is only a very faint nose of smoke and sweet undertones.

Palate: This whisky is pleasantly smoky and sweeter than your typical Scotch. It must be why it’s such a popular brand. I think the rum barrels also round out the sweetness.

An interesting twist to a mid-level Scotch. The rum barrels help with the sweetness and cuts down on the smoke and peat flavors. A true Scotch lover might not like the sweet flavors but I really enjoyed it as I'm not a huge peat fan. I personally like to taste more than just smoke.