Editor’s Note: This whisky was provided to us as a review sample by Craigellachie. This in no way, per our editorial policies, influenced the final outcome of this review.

If Scotch whisky producers were a high school class, Craigellachie would be the weird kid in the corner with full braces, huge ears, and an unfortunate scent of boiled rutabagas who shows up at his 30-year reunion having just sold his tech company for an ungodly sum and looking like Jeff Goldblum. A late bloomer, in other words.

Craigellachie is famous for its funky, full-flavored house style, the result of the whisky’s high sulfur content. That means young Craigellachie sometimes gets described as savory, meaty, or even eggy, with a boullion-like aroma that’s not always pleasant. Given time in the cask, however, those funky features can metamorphose into the kind of hard-earned character Calvin’s dad was always going on about.

Craigellachie 33-Year-Old is a perfect example of that transformation. This release from Bacardi showcases the amazing flavor (and price) development that takes place after more than three decades of maturation. It was released in 2017, originally as a travel retail exclusive, and only 1,700 bottles were made. Bacardi was kind enough to share a press sample with us.

Ordinarily, whisky makers don’t want too much sulfur in their products. At high concentrations, sulfur can make whisky smell burnt, meaty, farty, or like rotten eggs—rarely the sorts of flavors a producer is striving for. At lower concentrations, however, it can add an intriguing savory note and ample, satisfying mouth feel.

At Craigellachie, a number of different tactics help maintain the right sulfur levels in its whisky. One of the most commonly discussed of these is their use of a traditional worm tub condenser, which consists of a snaking copper tube (the worm) immersed in an outdoor pool of cold water. Copper pulls sulfur out of solution, and a worm tub offers less opportunity for the vapor to come in contact with copper, boosting sulfur retention. Craigellachie also uses a higher-sulfur coal-kilned barley for its mashes.

While sulfur stinks (literally) in a new-make spirit, time in the cask can help round its funky edges—and it turns out that 33 years is plenty of time. Let’s taste this delightful homage to the ugly duckling. 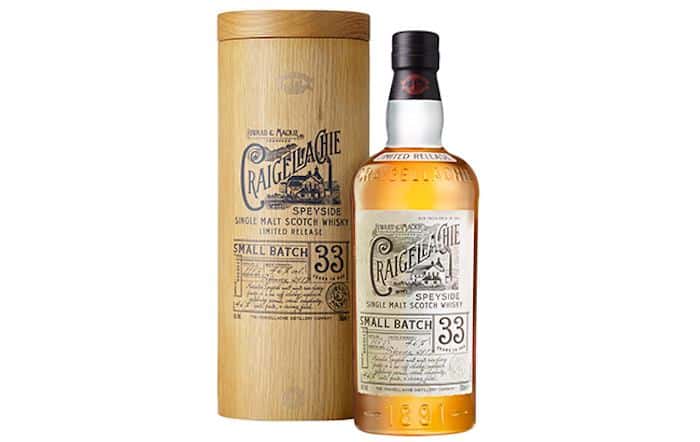 Palate: There’s lots of grain-driven stuff at first – brown bread, oatmeal raisin cookie, banana bread – but then things take an unusual segue. There’s an odd, almost electric minerality, like sucking on a penny or biting into tinfoil, accompanied by pure notes of peach, nectarine, and pineapple as well as a yogurt-like acidity. The finish is very long, with tart fruit, bitter herbs, and cooling notes of mint and eucalyptus. Ample and intense, with an all-encompassing mouth feel.

This is a very unusual whisky that feels almost electric on the palate. It’s unconfined, compelling, and challenging, and while I don’t know that it’s what every luxury consumer is looking for when they spend $3,000 on a bottle of whisky, but I do know that it’s an absolute pleasure to drink.