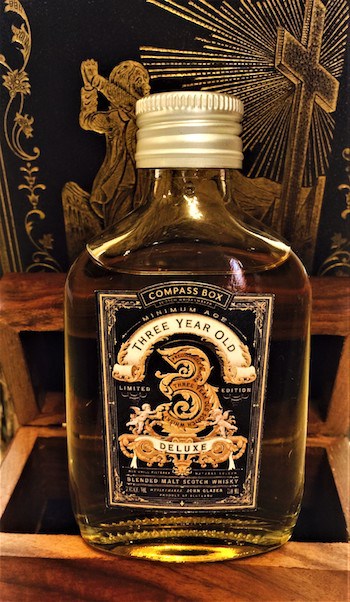 Compass Box’s Three Year Old Deluxe is an insider’s joke. This limited bottling sticks out its tongue playfully. How so? Well, suffice it to say that the company’s owner, John Glaser, is something of a rebel. I mean this in the very best “Star Wars” sense of the word.

A few recent Compass Box blended malt Scotch whiskies came close to announcing their precise contents, much to the chagrin of The Whisky Empire of Scotland.

I tend to think Glaser’s persistent scrapping on the mat of international commerce is partly responsible for the trends towards more transparency in regard to “what’s in your bottle.” I also think increased transparency will result in better whisky offerings by the big boys. Am I comparing these offerings to older mass produced blends of years gone by?

No, not really. Instead, I’m comparing them to what might otherwise be offered today. Sometimes we have to count our blessings, even though ten and twenty years ago whisky was generally of a higher caliber, despite using more “primitive” technologies in the distillation process.

By reading between the lines in Glaser’s disclosure for the Three Year Old Deluxe, whisky detectives can deduce that, what we have here, is basically the following:

Glaser’s latest blend is a smart attempt to recreate the older, brooding Brora’s of yesteryear. I really do miss them . . . and so, unless I’m visiting a friend of mine, who has a Brora in his liquor cabinet, and a few Port Ellens, as well, then the next best thing to drink is what I have in front of me.

Three Year Old Deluxe is Glaser’s humorously raised “two fingers up” at The Empire. Why? Because it contains unspecified ages of whiskies far and away older than a mere three years. In fact, only 0.4% of the single malt blend is 3 year-old Clynelish.

So why did Glaser choose three years? That is the minimum age allowed for a spirit to be officially labeled as “Scotch” whisky. It’s a very subtle dig, and if you still don’t get the joke . . . hey, no worries. The name is designed to put a smile on the face of whisky nerds, anyhow. Let’s taste the controversial broth, instead of continuing to gossip about it, shall we?

Nose: Waxy Clynelish goodness immediately comes through in spades, along with crisp clean apples, quince, orange peel, wet wool (not unlike Springbank Local Barley 16 Year Old), soggy porridge (in a good way), clotted cream, and just a whisper of peat. “Oh, the humanity!” This veritable Hindenburg of a blend will certainly get the big boy’s undies up in a bunch.

Palate: The crisp apples now taste baked, and topped with a flourish of cinnamon. Nectarines, as well? Yes, there are stewed orchard fruits: “Come buy, come buy!” quoth the goblin market. I’m also getting a decidedly old skool presence in the mouth. Wet wool, a bit of paraffin wax, along with some heather honey, and Ceylon tea.

I appreciate how Glaser describes the palate of this whisky, revealing that a goodly part of the blend hails from a location in close proximity to the mothballed ruins of Brora distillery. Of course, he’s speaking of Clyenlish distillery, and I taste that in spades. I needn’t hide the fact that I adore pre-1991 Clynelishes, which hadn’t yet become floral, perfumey “Speyside wannabes.”

Personally, I feel the whisky in front of me is not quite as rough and rugged as the mischievous Brora’s of yesteryear. I am reminded more of a Connoisseur’s Choice bottling that I tasted last year. It was a 24 year old Brora from 1982. In all fairness, however, it was quite a bit weaker than Glaser’s creation, bottled at a mere 43% ABV, as is maddeningly typical of the rarest Gordon & MacPhails. But there is a method to this madness: lower ABV’s equal more bottles to sell, and thus a higher profit margin for the company. Alas, alack, epicurean aesthete that I am, sometimes I forget that whisky is a business, and an industry, after all.

Finish: Chinese pepper, matsutake mushrooms pan fried in butter with some sea salt, lychee nut, a dollop of sour cream, and faint sprinkles of allspice climbing nimbly down the back of one’s throat in tiny elf shoes. Meanwhile, back at the fort…a delicate and sweet wood presence glides along the taste buds, causing the salivary glands rise to this occasion, as they cause the mouth to water.

And that is a very good thing, because hydration is just what the doctor ordered to keep the tissues of one’s tongue from wilting under this broth’s generously high ABV. After a blaze of glory, one’s tongue is left with an exotic persimmony zest, which hangs out for some time.

In the spirit of full disclosure, I am happy to state that Compass Box sent me a sample of Three Year Old Deluxe to review. Suffice it to say, a miniature bottle of this (admittedly lovely) broth is not enough to bribe Whisky Kirk in any way so as to sweeten up his tasting notes, or his review.

With the Three Year Old Deluxe, we have a whisky that is generating a grass roots following the old fashioned way: by earning it. This high quality blended malt Scotch whisky was made by a company that continues to grow organically, and naturally–based upon product offerings rather than slick advertising.

If you’re anything like me, then you like this fact. Speaking of which . . . I am reminded of Springbank distillery’s Longrow 18, one of my all-time faves, which also tips its light saber in the direction of Brora.