Whisky Review: Compass Box The Story Of The Spaniard

Six years after John Glaser founded Compass Box Whisky, he released the original The Story of the Spaniard. The Spaniard was first released in batches, but in 2018 it became a permanent bottle in Compass Box’s Malt Whisky Collection. It joins Peat Monster, Oak Cross, and Spice Tree for the core range.

Each Compass Box whisky has a distinct story behind the name. The Spaniard is a nod to Glaser’s encounter with a Spaniard. It was in the South of Spain where this man introduced Glaser to sherry for the first time. Whisky and sherry go hand in hand. For instance, it is quite common to find single malt scotch matured in Oloroso or Pedro Ximénez sherry casks or at least finished in them.

Fast forward to 2018, Glaser has since tweaked the original blend from where it started to give it more complexity. Now The Spaniard incorporates single malts matured in Spanish sherry and Spanish red wine barrels. So why the change to The Spaniard? Sherry has a broad spectrum of styles. Glaser also has a background in the wine industry, so rounding out The Spaniard’s maturation in Spanish wine casks encompasses his whole journey.

We have previously reviewed the Compass Box Signature Range set, but it did not include The Spaniard. If you are curious to try The Spaniard, Compass Box also offers a mini bottle set that has Peat Monster and Spice Tree along side it. Read below to see how the new recipe for The Spaniard fares. 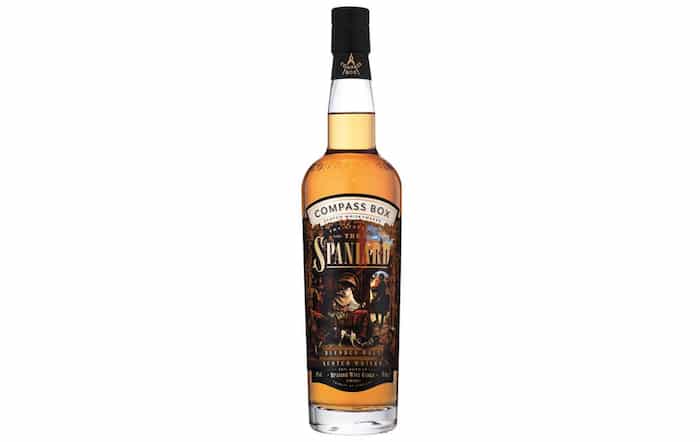 Compass Box The Story Of The Spaniard (image via Compass Box)

Tasting Notes: Compass Box The Story Of The Spaniard

Nose: At the forefront, I notice toasted English muffin with marmalade. The grain stands out before it moves on. It is ripe with sweet fruits like orange and quince. Cinnamon percolates throughout. Meanwhile, there is a bit of acetone in the background.

Palate: The whisky is sweet with honey and cinnamon. Orange zest peaks through with dried apricot. The middle rounds out with tobacco leaf and an earthiness from the peat. It is not overpowering with peat reek. The finish is dried oak and black tea.

The Spaniard from Compass Box is not overly peaty, which is great when introducing new scotch drinkers to whisky. Everything about this whisky is subtle and nuanced almost to the point of mistaking it for bland. However, it doesn't come off as too delicate. I would definitely recommend getting a mini bottle sampler first before deciding on purchasing a full-sized bottle. The red wine notes need a little coaxing, so in order to do so, I recommend pairing The Spaniard with different foods.