At Compass Box, John Glaser set out to make whisky in a way that had not been done before. Too often, he saw companies making and selling scotch with little innovation. At the time, most philosophies were along the lines of “if it ain’t broken, don’t fix it.” Compass Box arrived on the scene in 2000, just before the big whisky boom, and the Whiskymaker continues pushing the envelope.

Pushing the envelope sometimes meets resistance. Glaser invented the word Whiskymaker because it means that they are different from a distiller and more than a blender. Compass Box originally started in Glaser’s kitchen, but now it has headquarters in London and sources its whisky from Scotland. At Compass Box, they put their whisky into custom created barrels made up from staves of different casks. The casks themselves were typically considered for finishing.

In 2005, Glaser launched The Spice Tree. Although an instant hit with whisky drinkers, the Scotch Whisky Association (SWA) put the kibosh on the whisky. The SWA thought The Spice Tree was a radical departure from traditional whisky making standards, and Compass Box was forced to stop production of The Spice Tree all together by 2006.

Obviously, in order to appease the SWA Compass Box compromised so it could keep The Spice Tree in its Core Single Malt Whisky Collection. We first reviewed it here, but it has been awhile, so let’s see how it compares. Also, for those who don’t know what The Spice Tree is, what you’ve got here is a blended malt whisky “matured using a custom-made cask with French oak for the heads and American oak for the bodies.” 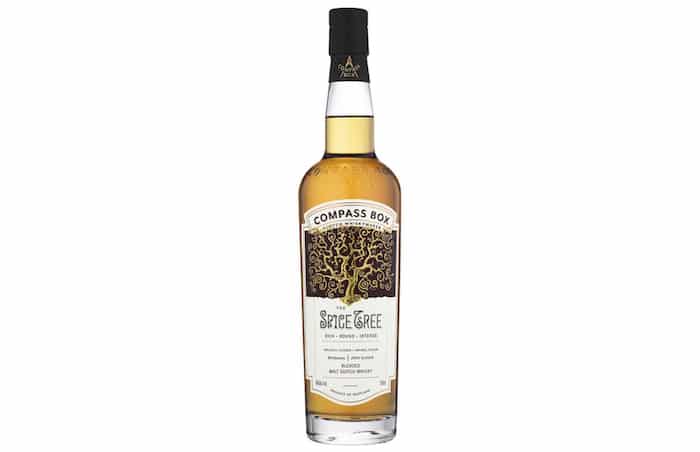 Nose: A bottle of perfume is what first comes to mind. Even just letting it sit in the glass on the table, you can smell it from a mile away like a little old lady walking into a room. The whisky is full of fresh rose and jasmine flowers. The spice on it is distinctly clove as if someone was smoking a Djarum near you. Rainier cherries peak through just enough. Meanwhile, smoked vanilla lingers throughout the whole dram.

Palate: The mouthfeel is soft and velvety. It is reminiscent of herbal tea since I can gather rose hips. There is a bit of heat that sneaks up on you. The clove from the nose is noticeable. However, clove is not the only spice. Ginger and allspice also join in. The sweetness is familiar clove honey. The finish though tastes soapy.

The Spice Tree from Compass Box is tasty, but the overwhelming perfume aroma gave me a headache. It is perfect for the holiday season with the spices that you would find in gingerbread cookies and loaves. It does come in the mini gift set with The Spaniard and Peat Monster if you do not want to commit to a full 750ml bottle. It is not going to be for everybody, but I recommend trying the little rebel at least once.