Editor’s Note: This whisky was provided to us as a review sample by Pernod Ricard. This in no way, per our editorial policies, influenced the final outcome of this review. It should also be noted that by clicking the buy link towards the bottom of this review our site receives a small referral payment which helps to support, but not influence, our editorial and other costs.

Ah, Chivas. One of the most ubiquitous spirit brands on the planet, Chivas Regal Blended Scotch Whisky has seen both lean and prosperous times over the last century.

Regarded as the ‘original luxury Scotch’, the brand found its identity in a grocery and wine merchants rather than the traditional notable distillery. Beginning in 1801, John Forrest set up this emporium in Aberdeen which was then passed to a gentleman by the name of William Edwards and then finally James Chivas in 1838. The other Chivas brother, John began working at DL Shirries and Co, a wholesale footwear and apparel firm.

What’s interesting when delving into the beginnings of the Chivas Brothers is that James and John didn’t start working together until 1860. However, three previous major events cemented the future of Chivas Brothers. The first being the 1843 Royal Warrant granted by Queen Victoria by which Chivas Regal Blended Scotch Whisky hangs it’s hat. A British Royal Warrant was important as it signified to upper class & nobility that royalty continually chose this supplier and naturally, the emporium/brand was inextricably linked with status.

This was compounded further by the second event when Charles Stewart and James Chivas became the Royal Grocer to the queen’s mother, the Duchess of Kent in 1850. Notoriety was on the side of emporium located on 13 King Street. The third definitive event before the pivotal year of 1860 for the beginning of Chivas as a brand was the 1853 Forbes-Mackenzie Act. This particular legislation had a lot to do with the closing of liquor stores on Sunday but there was significant new allowance in blending whisky.

The vatting legalization of spirits within Bond warehouses made a number of distilleries and their whiskies to be available overnight. Chivas, with their involved status with royalty and nobility, decided to create proprietary blends for their discerning clients. These events and the inclusion of John Chivas’s distribution network, set the foundation of the company for generations.

The latter half of the 1800’s and the start of the 1900’s saw Chivas Brothers and the whisky we have come to know take form. The initial blend in 1854 was called the Royal Glen Dee before becoming a proprietary 10 year malt and grain whisky called Royal Strathythan under the Chivas Brothers in 1863. By the turn of the century, the last present Chivas family member had passed but the brand-name was kept in perpetuity.

Around this time, as grain whisky became ever ready available and international markets started to emerge, the company looked to the United States. In continuing its link with royalty and status, the Chivas Brothers released Chivas Regal 25 year old Blended Scotch Whisky in 1909. As the world’s oldest blended Scotch whiskey of its era, it sadly had a short success. World War I, Prohibition and a Depression all led to a whisky recoil.

Chivas Regal has always been a malt-dominant blended Scottish whisky. From 1900, Charles Stewart Howard, the Master Blender looked to create a well incorporated blend that was to honor the bold characters of the Chivas Brothers, James and John.

So what is in the blend? Well, as with pretty much all blended Scotch whisky, the blend recipes are proprietary. But with that being said, the Chivas home distillery of Strathisla makes up the core of the malt. Confirmation from the brand mentions the inclusion of the Pernod Ricard distilleries of Longmorn, Glenlivet, Braeval, Miltonduff and Allt-a-Bhaine.

Anonymity also surrounds the grain whisky portion but, from research, Strathclyde distillery in Glasgow has undoubtedly been involved. Recently retired Master Blender Colin Scott and Director of Blending, Sandy Hyslop, have been the leaders in keeping Chivas Regal’s quality for over the last 47 years. 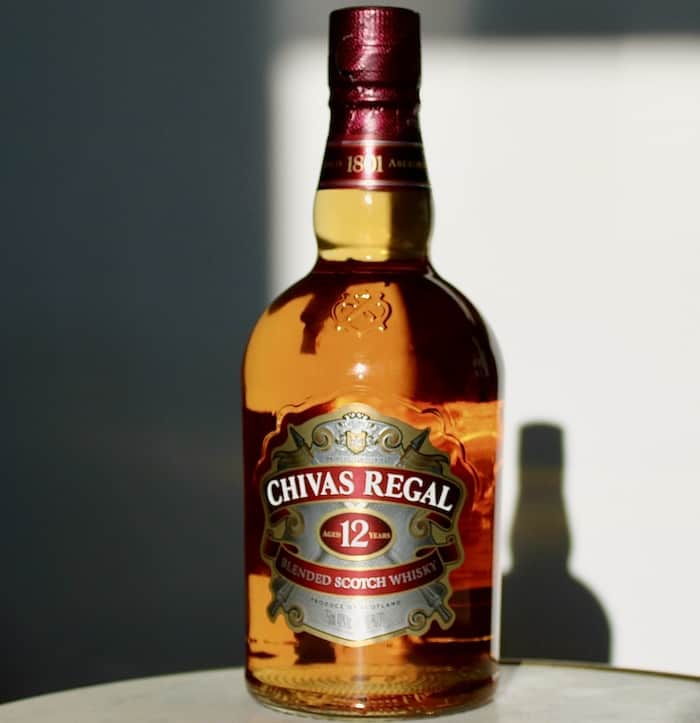 Finish: Jasmine.. A drying sensation on either sides of the palate, flint rock and citrus peel.

Revisiting this classic has been a surprising exercise. Chivas Regal 12 Year Old still stands up by itself as a more than solid introductory sipper. Incredibly well balanced and having a lot more body than I remember. That being said, this expression has been around for a long time and is often overlooked in newer markets.

A healthy pour and some highly carbonated sparkling water with a lemon twist may just pleasantly surprise even the most jaded whisky critic.

3.5
User Rating 3.05 (43 votes)
Sending
23
Shares
25.5k
Views
Share on FacebookShare on TwitterGet Our Newsletter
Cheers to the Dads! Personalize a bottle of his favorite whiskey to create a modern gift for the modern man. Use code: FATHERSDAY20 for $20 off your next order of $100 or more at ReserveBar