Bruichladdich’s continuous exploration and experimentation with terroir shines with its Barley Series. They call it an “obsession,” but this attention to detail since the revival of the distillery in 2001 is why Bruichladdich is my favorite distillery. Transparency is a key component at Bruichladdich. Instead of farm-to-table, they give us farm-to-bottle.

The Bruichladdich Organic 2010 is, you guessed it, made from organic barley. William Rose runs Mid Coul Farms, a century farm in Inverness, Scotland. It has gone from traditional to high-tech in order to meet sustainability both environmentally and economically. The organic barley is grown in a “seven-year rotation among organic cattle, sheep, oats, beans, grass, carrots and market gardening.”

At Mid Coul Farms, Rose rejects the use of artificial fertilizers, herbicides, fungicides, and pesticides; especially those that are petrochemical based. Ensuring high crop yields without any of these is tough work. It requires the use of special machinery and novel approaches to cultivation. 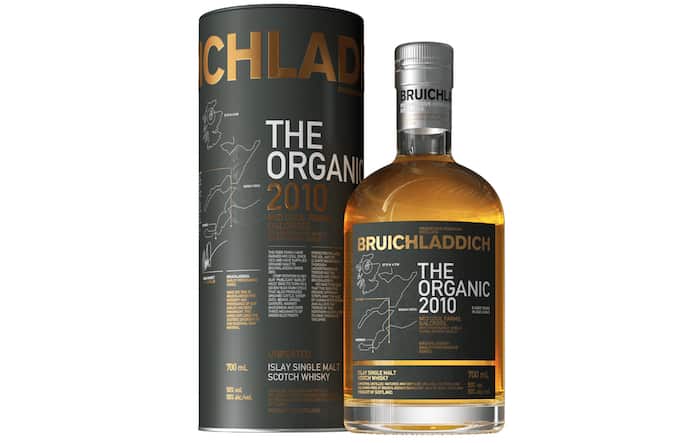 Nose: The whisky is high octane right from the bottle; I let it sit for about 5 minutes to open up and breathe. Green apple and bright pear start off the dram. Wet oak and fresh barley mingle to add a nice layer of depth and earthiness. Pastry dough with apricot or peach filling and baking spices come out near the end.

Palate: At first taste, the whisky is hot and has a big cresol or rubber flavor. A touch of soot and fruity sweetness are hidden by the bold malted grain and grass. Overall, the whisky is earthy with just a taste of pear galette.

While I appreciate the whisky, the difference between the nose and the palate doesn't quite mesh. The ABV won't turn people away, but the palate might with its rubber and cresol notes that mask light flavors. Some people may love it, but overall I see this as a dividing whisky among Bruichladdich fans. It's not as light and floral like other unpeated Bruichladdich namesake expressions.