Editor’s Note: This whisky was provided to us as a review sample by Bruichladdich. This in no way, per our editorial policies, influenced the final outcome of this review.

How does terrior come through in spirits? Very few producers dare answer this question with their hard work and years of commitment. Tequila Ocho in Mexico comes to mind, but agave is well known for its variety of character and attitude. Wine is the most conversed about when the word terroir is heard, but it doesn’t experience the dramatic process of distillation. Technique, ingredients and aging are well known influencers of how a whisky tastes, but we now have a benchmark available on the worldwide market that attempts to grasp the terroir of Islay, Scotland.

The modernistic team at Bruichladdich have a fresh approach to many things while they churn out agreeably fantastic whisky. The Islay Barley 2011 is part of their long dreamt release series that features 100% barley from the island of Islay. This particular year features six farms, whose farmers have artful portraits on the Bruichladdich website. Previous years see different combinations of farms per bottle, but the idea is that each year can be compared to the next as a representation of yearly terroir. This provides one of the first openly available whisky lines of its type.

According to their website, Bruichladdich does not malt their own barley. This means they must send their barley to a malting facility before receiving it to make their whisky. This is a small detail, but an interesting one to consider when we think about the environmental impact of spirits production. The Islay Barley likely has a much smaller footprint than a comparable product in its category. With that, we must find out what Islay tastes like! 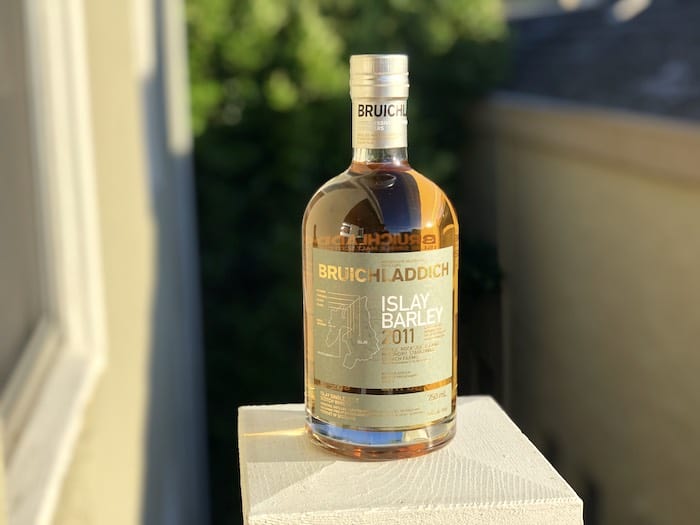 Vital Stats: 100 proof, 100% malted barley from the island of Islay, $70 for a 750mL, distilled in 2011 and aged 6 years in ex-bourbon casks as well as Rivesaltes, Sauternes and Austrian sweet wine casks.

Nose: Malt and freshly mowed wet grass. An almost seeweed like sourness is balanced by base grain and spice. Bright, with plenty of citrus.

Palate: Some smoke or char influence from the barrel. Fresh and bright, with meyer lemon and rhubarb. Coconut, white chocolate, and baking spice along with wildflower honey. Incredibly well balanced, the alcohol dissipated nicely leaving an oily texture that carries the long, nutty finish.

Absolutely fantastic. I would love to try this next to the other two expressions they advertise, and see what comparisons I could find between the years. This is a distinct quality behind this whisky that I would like to assume comes from the fact that it is made entirely from Islay barley. Balanced and mouth coating, it is an exceptional whisky for the price point of around $60. The sweet wine cask aging keeps the bourbon casks in check, adding subtle sweetness and lighter, more floral notes. I could drink this every day!