The third installment of what Bruichladdich calls the “Über-Provenance Barley Exploration Series” is the Bere Barley 2010. In 2001, when the distillery was brought back to life, the decision to respect the past but bring innovation set in motion the path to this series. Focusing on terroir, an obscure concept in the whisky world but familiar to vintners, was just the start.

Almost two decades later, Bruichladdich tackles the colossal project of a nuanced barley obsession. They catalogue and trace barley parcel by parcel and its impact on the whisky. The Islay distillery works with 27 farms from Islay, Orkney and the Scottish mainland.

Bere is a tall, six-row almost long-forgotten ancient grain. Although it yields fifty percent of what a modern crop would, it does have one interesting advantage. The Bere barley strain can grow on Orkney. Yes, the same windswept, notoriously treeless, Orkney Islands.

The Bere barley harvested for Bruichladdich comes from Weyland, Watersfield, Quoyberstane, Northfield, and Richmond Villa Farms. Compared to the Bruichladdich The Organic 2010, multiple farms are used because of the crop yield for Bere barley. At the same time, the Bruichladdich can’t be certified organic because a small amount of artificial fertilizer is used when the Bere is sowed. Let’s see how the Bere fares… 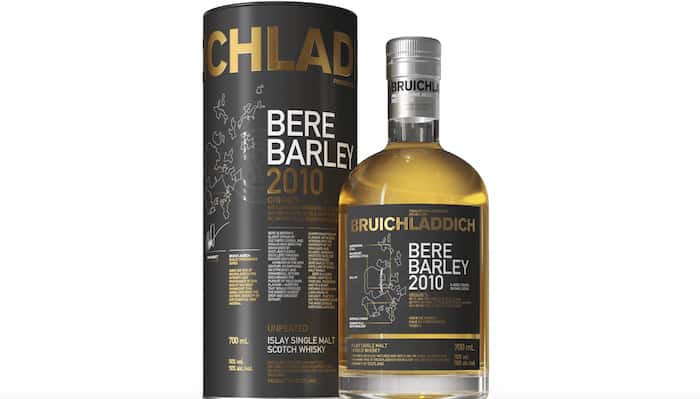 Nose: High octane, but breathable. Juicy strawberry, gala apple, and summer nectarine go full frontal at the start of this whisky. It’s unbelievably fruity and quite refreshing. Jasmine and heather linger throughout the dram. Bright citrus zest round out the end.

Palate: Fresh apple slice is the first thing I notice before it moves into a slight smokiness. Clove and burnt rubber jam up in the middle like a car wreck briefly with cresol. Citrus zest with faint vanilla peek through just before the finish. When clove and malted grain mix with the dry oak on the finish, it leaves cigarette breath in the aftertaste.

The Bruichladdich Bere Barley 2010 is extraordinarily fruity with juicy summer fruits. I've never tasted a scotch quite like it. While is has a bit of cresol and rubber similar to the Bruichladdich The Organic 2010, it's not overpowering and lingering. I can see why it is out of stock on the Bruichladdich shop.

If you come across a bottle of it, don't hesitate to buy it to experience how the ancient grain impacts the whisky. Bruichladdich states, "this ancient grain yet again confirms our barley exploration is based on distillation for flavour not yield."