Editor’s Note: This whisky was provided to us as a review sample by Bowmore. This in no way, per our editorial policies, influenced the final outcome of this review. It should also be noted that by clicking the buy link towards the bottom of this review our site receives a small referral payment which helps to support, but not influence, our editorial and other costs.

The process of acquainting myself with Islay distilling stalwart Bowmore more closely resembled my first watch-through of Netflix’s Dark than I was expecting. While I, thankfully, was not relentlessly pursued by a priest tattooed with arcane secrets, I did inadvertently lapse into metaphysical contemplation about the nature of Time.

This is, in part, a result of Bowmore’s “Art of Time” marketing series being a touch more esoteric than the usual promotional campaign. Counting itself as one of Scotland’s oldest distilleries, Bowmore traces its history as Islay’s first licensed distillery back to 1779.

In the intervening 240-odd years the distillery has undergone numerous changes, weathered closures and war, and changed hands several times. Today it is owned by global whisk(e)y giant Beam Suntory, but Bowmore still leans heavily into traditional processes for whisky production such as floor-malting.

Marketing departments for older producers will often want to establish a connection to generation-spanning traditions of whisky-making that inform today’s industrial-scale products, but this isn’t always meaningless verbal packaging. Engaging with the long history of Bowmore distillery leads one to consider how these traditions, much like whisky itself, are not themselves completely stable so much as they are the result of decades, or centuries, of accumulated changes.

It is not every distillery that counts a 12 year bottling at the “younger” end of their age statement offerings, but Bowmore places particular emphasis on the maturation process and offers their 12 Year Old as the entry point to their range. To be sold as a single malt, all whisky must be sourced from the Bowmore distillery alone. Production at the Bowmore distillery incorporates historical processes such as floor malting, sourcing soft water from the nearby River Laggan, and fermentation taking place in massive washbacks made from Oregon Pine. Used casks, generally ex-bourbon barrels, house the whisky during its long maturation process. 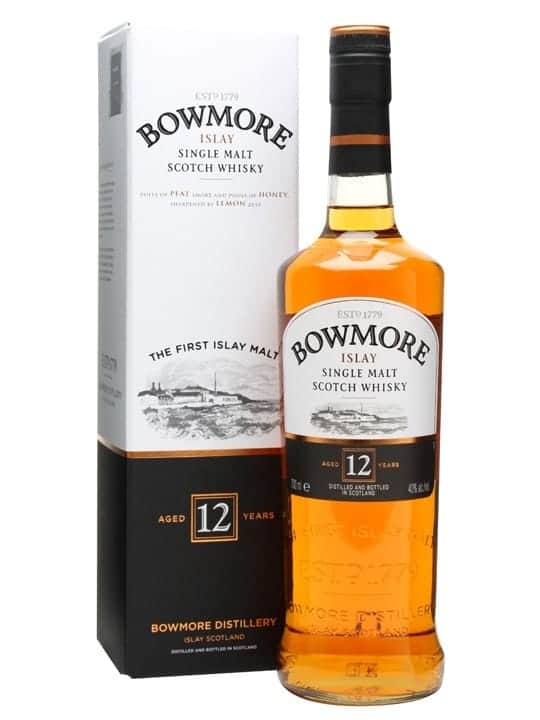 Appearance: The clear honey color might trick one into thinking it is very “light,” but give this a swirl in your glass to get an idea of its sneaky-dense viscosity.

Palate: The low proof makes for an incredibly smooth and easy-drinking pour. There is a durable leathery-chocolate flavor enhanced by minerality and smoke that doesn’t evolve so much as gently ebb into the finish.

This is a very accessible Islay malt. The flavor is rich and pronounced but unintimidating with the pleasant, nostalgic smokiness of a coastal campfire. Stateside, Islay whisky is probably best known for the peat-bombs from Ardbeg or Laphroaig, but if you have little or no experience with peated whiskey, Bowmore 12 is a great option for getting your palate around this somewhat assertive flavor. That said, there’s plenty for the peat-enthusiast to like here. Balanced and easy-drinking, this is an excellent evening sipper. Grab some Marcel Proust or Philip Dick off the shelf, pour a glass, and enjoy a good think about the passage of time.