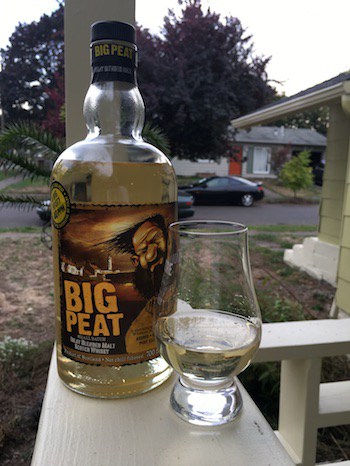 At first glance, Douglas Laing’s Big Peat Small Batch Islay Blended Malt Scotch Whisky seems like a bottle for the likes of the rugged, imperturbable peat lovers of the world: the weathered, windblown, thick-bearded Scot illustrated on the bottle or the zealously self-reliant, libertarian Ron Swanson of NBC’s Parks and Recreation.

Yet, for all of the braggadocio on the bottle that prepares its consumer for a blast of peat smoke, Big Peat is unexpectedly subtle on the peat. This leaves it a bit of room on the palate for a number of flavors, albeit smoky, spicy and earthy ones.

That balance of flavors comes from a blend of single malts – or the “remarkable marriage” – of some of the island of Islay’s most famous whiskies. In particular, Caol Ila brings “sweetness,” Ardbeg brings a “medicinal, earthy quality, Port Ellen adds “a degree of elegance,” and Bowmore “the perfect balance.”

The final product, which the bottle notes is neither colored nor chill-filtered, is bottled at the “high alcohol strength” of 46 percent alcohol by volume.

Appearance: Much more water-like than the typical scotch: nearly transparent and seemingly tinted, like rosé but with more of a light bronze color. Nevertheless, a swirl demonstrates that it’s a much thicker liquid than it may at first appear.

Nose: Unsurprisingly, a whiff of Big Peat is dominated by peat, lots of peat. However, it gently wafts through nasal passages, bringing with it a hint of earthy sea-salt smell that seems exemplary of a boggy, craggy spit of land amongst the British Isles.

Palate: Gently relaxes on the tongue with texture and sweetness of a simple syrup, but quickly takes on spicy, earthy notes of ash and freshly-ground black peppercorn. Those flavors gradually give way to smoky peat flavor exemplified by Islay, but much more subdued than other whiskies from the area. The peat smoke gains its greatest potency after swallowing, leaving an oily, but gaseous coating the lightly burns the back of the mouth.

If you have a passion for exceptionally peaty whisky, Big Peat will leave something to be desired. However, for those who are looking an introduction to Islay Scotch or want something less than a peat kiln in their mouths, Big Peat is a solid choice. Its smell and flavor are certainly dominated by peat, which limits its potential for complexity.

Nonetheless, for all of the flavor that a name like Big Peat boasts, this whisky is more subtle than you’d expect, and leaves room for scents and flavors beyond just peat.