The curious case of the BenRiach Distillery is one filled with setbacks and perseverance; all they ever wanted to do was make a stand out whisky in the “heart of Speyside.” Because of multiple changes in the ownership over the brand, BenRiach is sitting on an abundance of aged single malt whisky.

One bottle in particular, the BenRiach Curiositas 10 Year Old, is an ode to” the original Speyside character and flavor of malts typical of the nineteenth century.” What this means in more practical terms is that this expression is a decade old, making use of a heavily peated malted barley as the cereal varietal to create this 46% ABV bottling.

Speyside whiskies range anywhere from light and floral to full-bodied and smoky, which can appease new and seasoned Scotch fans alike. While BenRiach isn’t a household name like Glenfiddich, Glenlivet, or Macallan, I see it becoming a home bar staple in the near future not only because of the price point but because of the various styles of single malt produced. Acquired by Brown-Forman in 2016, it’s just a matter of time to see the BenRiach brand in more liquor shelves in the US. 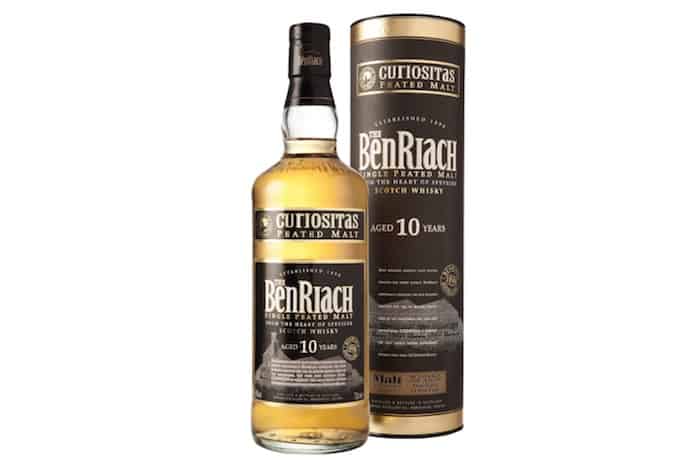 Appearance: Pale straw. (Fun fact: may be mistaken for a white wine based on color…unsuspecting drinker may or may not hate you.)

Nose: Despite being peatier than other Speysides, the peat isn’t a punch in the face. Beyond the peat, there is just a hint of banana, cherry, and vanilla.

Palate: Reminiscent of summer wildfires; the BenRiach Curiositas 10 Year Old is arid, dry, and oaky leaving you thirsty with each sip. The mouthfeel is actually quite oily. The peat is tamable, but the overwhelming factor is the high alcohol content, nutmeg and baking spices. As it unfolds on the tongue, there is a faint fruitiness of banana with a wee bit of vanilla. The most pronounced flavors besides the peat, is Scottish heather, leather and cigar.

The aftertaste takes several minutes to dissipate, in that time you have two options; the first is to let the asphaltum linger, the second is to clear it away with water or a beer back.

The BenRiach Curiostas 10 Year Old, while complex, does not satiate my thirst. The dry mouth side effect is the only reason I cannot rate it four stars. On the other hand, the intense peat is balanced by strong heather and fruit notes, which is very much appreciated. This single malt is something I would reach for in the dreary winter months.