Editor’s Note: This whisky was provided to us as a review sample by Aultmore. This in no way, per our editorial policies, influenced the final outcome of this review.

Part of the Bacardi roster of distilleries, Aultmore is an under-the-radar malt producer referred to by Difford’s Guide as the “rarest of Speyside,” a claim that lines up with my personal experience. Until now, I’d never tasted an Aultmore whisky, but after sampling this 21-year-old bottling of the stuff, I’m ready to start seeking out this rare treat a little more frequently.

Tucked away in the Foggie Moss Burn along the Burn of Auchinderran not far from North Bogbain, the Aultmore Distillery anchors an area of Speyside clearly blessed in terms of evocative place names as well as whisky. The company was founded in 1896 by Alexander Edwards, an energetic whisky industry entrepreneur who was the owner of Benrinnes Distillery and a founding member of the Craigellachie Distillery. After launching Aultmore, he’d go on to start Dallas Dhu and Benromach, then purchase a major share of Oban.

The late 1800s were a major whisky boom, and Aultmore had a handful of great years before it fell as one of the dominoes in the Pattison Crash. After a few years of mothballed down time, Aultmore bounced back, and following another hiatus during World War I it resumed its business of making fresh, floral, fruity single malt on a steadier basis.

One of the reasons Aultmore is so rare in the United States is that it makes up a major blending component of Dewar’s. However, an official 12-year-old release is available in some markets, as well as a 25-year-old. This particular expression, a 21-year-old, was initially introduced to travel retail but now also appears to be available at a few regular retail outlets in North America. 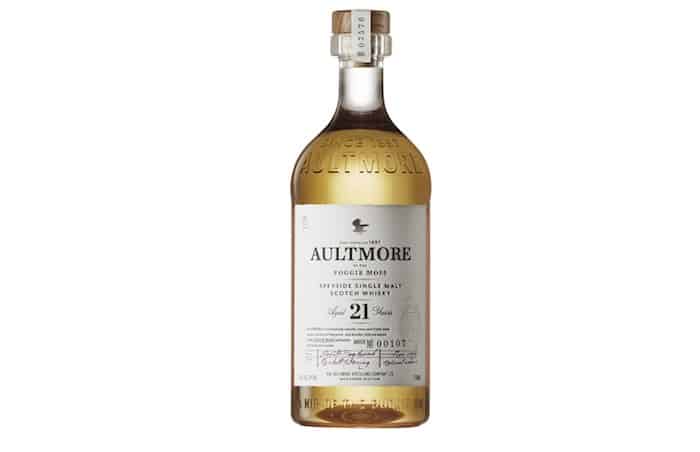 Nose: A fine and precise nose. There’s lots of fruit, like melon, mango, peachie rings, perfectly ripe pear, full bloom roses, and candied violets, like a frolic through the gummies section of a candy store. There’s also a very subtle undertone of malt, a touch of menthol, wafts of hot iron and smoke, and a bit of candle wax. Really nicely integrated – lovely.

Palate: Honed and fine. There’s some fruit for sure – richer fruits like banana, papaya, and coconut. Then, maltier, kernel-like tones emerge—pencil lead, oatcakes, sourdough—segueing to a warming wave of cinnamon and black pepper in the finish. That spice at the end gives it surprising heat for a 46% whisky.

Honed and precise, a lovely old school malt with very minimal oak influence free from superfluous casking or other antics. Expensive at around $250, but enjoyable.