The year was 1900 when the Warenghem family decided to found its eponymous distillery, and then began making various fruit spirits in the Brittany region of North West France. The distillery continues to remain a family-run operation even when it changed hands from the Warenghem family to the Leizour family in 1967. That year also marked the moving of the distillery from the center of the town of Lannion to its outskirts. This move allowed the distillery to grow and also gave better access to a new water source, a natural spring known as Rest Avel (dwelling of the wind), which is located 100m directly below the distillery.

The early 1980’s saw another transition at Warenghem as Gilles Leizour succeeded his father Yves and in an attempt to revive the distillery, decided to focus the company’s activities on regional products. This began the journey of Warenhem being the first distillery to launch whisky to be released from Brittany, as well as the first single malt whisky to be distilled in France.

The fine-tuning of their whisky-making process also included the first distillery in France to be constructed solely dedicated to the making of whiskey in 1993. Since 1998, that whiskey has been released as Amorik as a tribute to the culture and heritage of the land that they call home and from where they draw their resources.

Now as I am sure that you all have committed those dates to memory (there will be a quiz later), it is also notable that this may not be the first time that we have heard of this brand. It first left the Breton shores earlier in this century but has now found new distributorship with Heavenly Spirits and now arrives to us at a higher proof and in an expanded repertoire of expressions.

My last look at Armorik coved the Classic expression, this time around we are going to take a look at their Sherry Cask Finish. 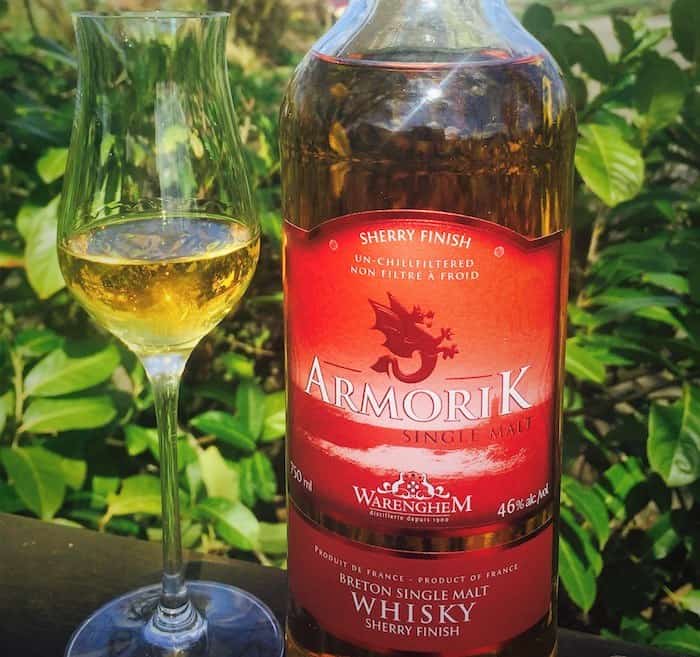 Appearance:  Clear, yellow-gold with a slight green tea hue. The spirit leaves tightly formed rivulets that descend slowly down the side of the tasting glass.

Nose: Bubble gum and honey on the first approach with a medium intensity. The second yields more floral and saccharine notes.

Palate: The bubble gum that was hinted at on the nose certainly makes itself known. Light acidity with a warm medium finish. Red wine and walnut linger. This would pair well with fruit and rich cheeses.

This may come across as too sweet and one dimensional to stand on its own. The sherry influence seems to dominate despite the relatively short time in the cask. However, I think this could work well paired with food. A first course of sliced fruit, charcuterie, or rich cheese would definitely bring out more character and depth.