We are once again visiting the northwest corner of France, a region with a long cultural history in a country with a long history of distilling spirits.

The ancient Romans referred to this land as Armorica, and we know this area today as Brittany. Brittany is recognized as the traditional homeland of the Breton people, and is one of the six Celtic Nations.

While the different Celtic Nations share a close history and geographic proximity, whiskey making has obviously been part of the cultural identity as well. And, just as the ancient languages that are still spoken in these regions retain their individual cultural pride, so do their whiskies.

The Warenghem Distillery is currently located in Lannion, Brittany, and has been producing liqueurs and spirits for over 100 years. Known for their Elixir d’ Armorique, the distillery passed from one generation to next, creating a small range of unusual fruit- and plant-based liqueurs, honey liqueurs, apple brandy, beers and whisky. Thirty years ago, Warenghem made the first double-distilled whisky produced in France, called Armorik as testament to the history of the area.

The whiskey from this area, or “Whiskey de Bretagne,” has certainly caught on, and is now recognized with its own Geographic Indication. The particular environment around Warenghem features soil that is mostly granitic, and with it being less than six miles away from the sea, the air is also very iodized. The weather tends to be windy and rainy, with the same humidity as the Scottish Highlands, but with the temperature being overall warmer.

With the use of French barley and water sourced from a natural spring known as Rest Avel (meaning “dwelling of wind”), Armorik aims to incorporate traditions as well region specific advantages to create a product distinctly recognized as their own.

That distinction is further expressed with Armorik Double Maturation, which uses local Breton oak from the forest of Armorik through a partnership with the last remaining Breton cooper. After the single malt spends about five years in those unique barrels, it then spends the next two in former Oloroso de Jerez sherry casks. 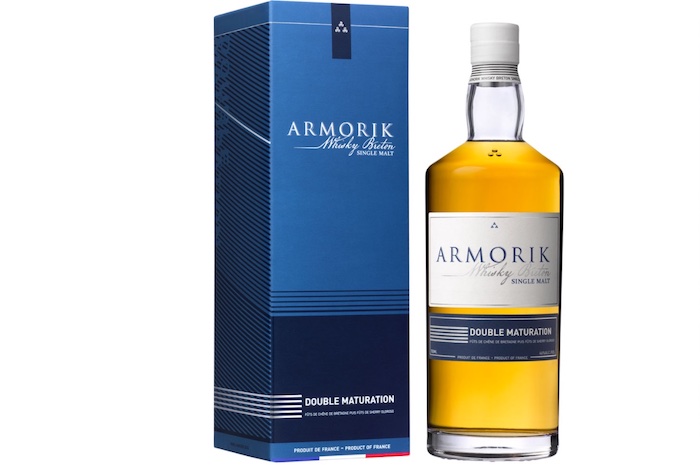 Palate: Soft as it first comes in, but then opens up a bit as it warms. A moderate acidity develops filled by the warmth of the alcohol. Then, citrus and floral notes begin leading to a long sweet finish.

Subtlety is the key with this one. All of its characteristics are delicate, but seem to be polite to one another and give each one ample time to manifest. The Breton oak seems to be a bit more tannic, but it would be hard to note if you weren’t aware ahead of tasting. Similarly with the sherry aspect. It has a sweet finish, but nothing that gives it away a specifically oloroso influence. As with the other Armorik expressions I have tasted, I feel that a food pairing would do the most justice. Maybe some crepes with this one.