Ardbeg’s most recent permanent release, the 19-year-old Traigh Bhan, is now on it’s second batch. The batches differ from one another similar to the changes in coastal weather. The pronunciation for Traigh Bhan is “Tri-Van.” Traigh Bhan is not only Ardbeg’s latest whisky, it is also the Islay beach known as the “Singing Sands.”

The Ardbeg Traigh Bhan (Batch 2) was bottled during a Haar. No, not a hurry. In non Scots Gaelic, that means a thick coastal fog or mist. Ardbeg seized the moment to give us “an opportunity not to be mist.” Apparently, the first batch of Traigh Bhan was bottled in a storm.

Like Macallan with its Editions series, Ardbeg fans and collectors will want to get their hands on the Ardbeg 19-Year-Old series. Batch 2 is similar, but with new nuances compared to Batch 1. It is possible to like one batch of the Ardbeg 19-Year-Old and dislike another batch. Batch 2, for example, has more barrels in the blend that are first fill ex-bourbon barrels.

Ardbeg’s Whisky Creator, Dr. Bill Lumsden thinks “this whisky is the epitome of an aged Ardbeg.” While I don’t disagree that the whisky is a peaty beast Ardbeg is known for, I hesitate to put it at the top of my list for Ardbeg. I spent over a week tasting the whisky. On one hand I’m not thrilled with it, which you can see why in my tasting notes, but on the other I kind of crave it. 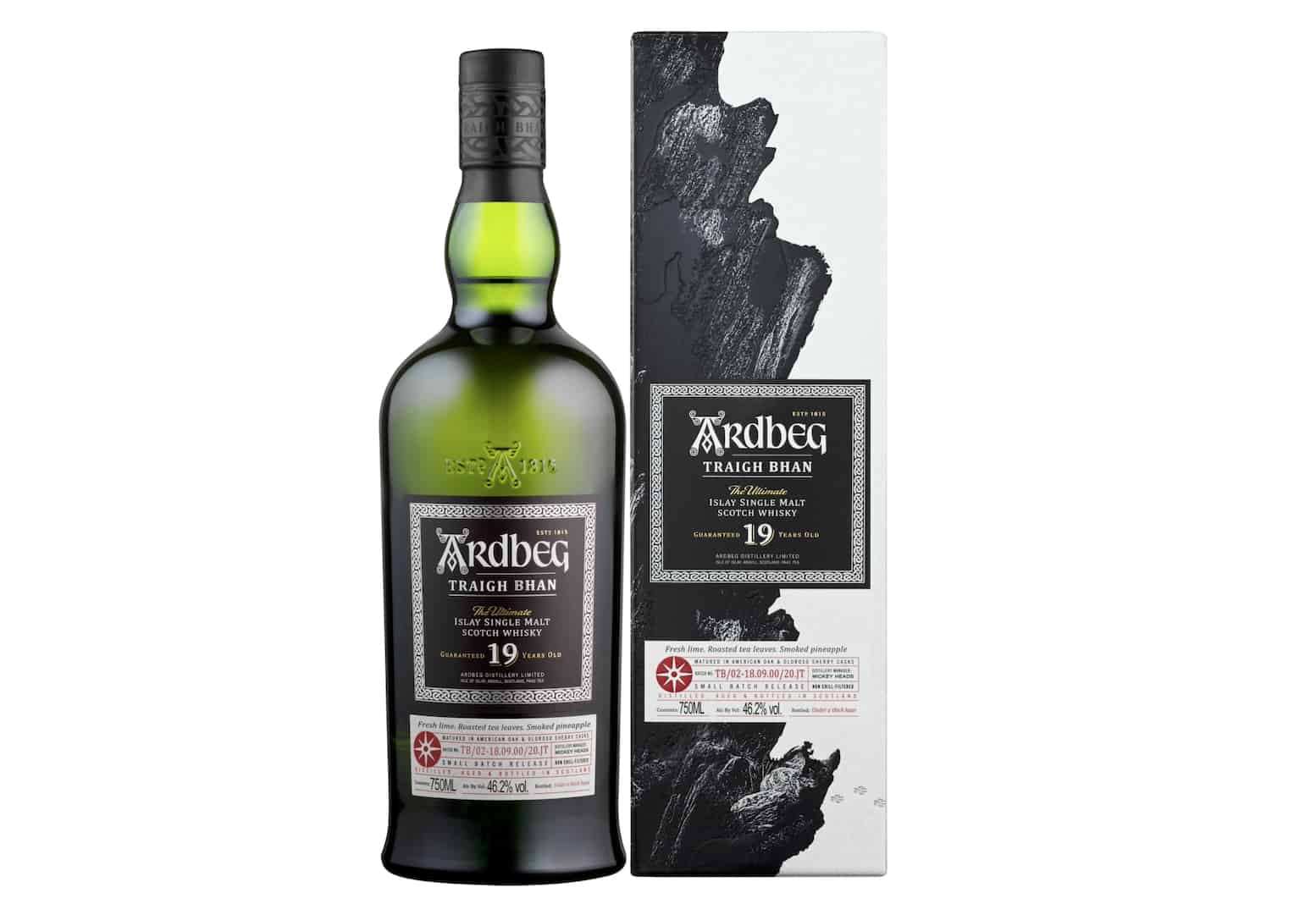 Nose: The nose is incredibly earthy with the likes of mushroom and damp soil. Add in the peat reek, and it’s reminiscent of an extinguished campfire. On a different note, the dram is quite fruity. I get bright satsuma peel and tangelo segment. Underlying the whisky to bring everything together is the faint sweetness of honeycomb.

Palate: The mouthfeel is light but overwhelmingly hot. There is no sweetness to it except for maybe a kiss of honey. There is the faint mist of salt air, or sea spray. Mainly, the Ardbeg is all smoke and soot with umami or mushroom. The bright fruit on the nose hides away behind the peat; it’s just not there on the palate. Rose hips with a little eucalyptus add a floral or tea-like taste. Overall, the only way to describe the taste is the smell of burnt rubber on asphalt. Adding water makes this more enjoyable than straight.

The Arbeg 19-Year-Old Traigh Bhan (Batch 2) has a wonderful nose on it. You pick up on the complexities and subtleties. The palate though just was not giving me the nuances I desired that I can usually taste in other Ardbegs. I'm not fully disappointed with it as I find myself wanting to drink it. With water, it's more palatable. It is a classic Ardbeg, but I just couldn't get the notes Dr. Bill Lumsden, its creator, put out.