Editor’s Note: These whiskeys were provided to us as review samples by Wildwood Spirits Co. This in no way, per our editorial policies, influenced the final outcome of this review. It should also be noted that by clicking the buy links towards the bottom of this review our site receives a small referral payment which helps to support, but not influence, our editorial and other costs.

Emerald City, 2001. Erik Liedholm was enjoying his life in Seattle and his post as head sommelier the downtown Hyatt. Occasionally, he’d run a batch through a small still in his garage, tinkering with distillates and furthering his fascination with the process of making alcohol.

Fate was not about to let Liedholm rest on his laurels, however.

Enter Chef John Howie. He was eager to lure Liedholm away to Bellevue and his new project, the Seastar Restaurant And Raw Bar. Legend holds (the legend according to Howie, at least) it took many hours of cajoling, needling and flattery to convince Liedholm that he should take up this new beverage directing position.

Of course, a new program must choose the spirits. As many high-end restaurants in the local-loving Pacific Northwest are wont to do, the Sea Star team tasted through reams of local spirits, trying to find the perfect fit for their menu. Some were great, some were OK, but none were quite right. “Our goal was to find something truly special, so we thought why don’t we just make it ourselves?” remembers Howie on his website.

At first, an arcane Washington State law thwarted them. This law banned restaurant owners from also owning alcohol production, as it disrupted the three-tier system. They needed to find a situation where they could call the shots, but not produce the spirits themselves.

Knowing the power of a relentless charm offensive, Liedholm slowly talked Kris Berglund into joining their pursuit. Berglund was a Michigan State University biochemist best known for creating innovative products with the same processes that produce ethanol. One of his patented methods turned lysine, from corn starch fermentation, into a salt substitute. Lately, he had been working with some big-name distilleries to formulate and produce spirits out of MSU.

Once agreement was reached, 15,000 pounds of Washington red alum wheat went to Michigan for testing. Soon, the first batches of what would become Wildwood Spirits were coming off the still. The distillery was officially founded in 2014.

Flash-forward to the present day and Liedholm has gone from a hobby setup to a Karl 450-liter pot still and earned certification by The Institute of Brewing and Distilling in London. According to their literature, Wildwood is using 90% Washington State produce to pump out 24 barrels of whiskey a year, in addition to vodka and gin. They focus on organic, non-GMO grains and botanicals.

Today we’ll taste The Dark Door Bourbons, two whiskeys with the same bones and pedigree, one just a little older. 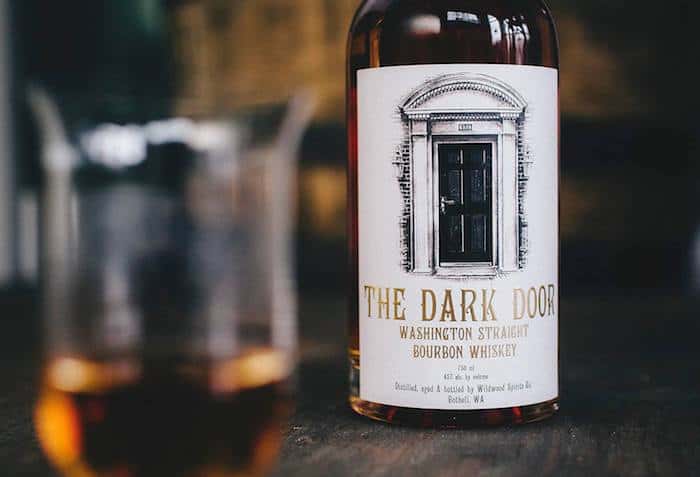 Vital stats: The Dark Door Bourbons are 90 proof, distilled in Bothell, WA, and made from 80% corn, 15% white wheat, 5% malted barley. All grains are from Washington. Find a 750mL bottle at the distillery or online for around $63.

Nose: Elmer’s Glue is first out of the glass in this delicate nose, followed by burnt sugar and dusty barn. Ripe peach floats through paired with apple blossom.

Palate: Cereal sweetness on the approach, edged with toffee. Slight herbal bitterness hits on the mid-palate. The finish rounds into allspice and walnut.

Vital stats: The Dark Door Bourbons are 90 proof, distilled in Bothell, WA, and made from 80% corn, 15% white wheat, 5% malted barley. All grains are from Washington. Find a 750mL bottle at the distillery or online for around $63.

Nose: The two year smells gently of pencil shavings. The Elmer’s Glue quality is there though less pronounced. Sweet notes shift to honey and vanilla extract with vegetal notes and cedar.

Palate: This whiskey comes across sweeter – dark cherry – and less spicy. A creaminess blooms on the mid-palate, followed by a lingering finish of black tea.

Final Thoughts: The Dark Door bourbons are a worthy endeavor. They’re carefully made and enjoyable to drink. They’ll work great in cocktails. I would love to taste this formulation with a little more time in barrel, to see where those mellow trends are leading.

1
Shares
700
Views
Share on FacebookShare on TwitterGet Our Newsletter
Get Jefferson's Ocean at ReserveBar. Shop now!