Editor’s Note: These whiskeys were provided to us as review samples by Wigle Whiskey. This in no way, per our editorial policies, influenced the final outcome of this review. It should also be noted that by clicking the buy links in this article our site receives a small referral payment which helps to support, but not influence, our editorial and other costs.

Western Pennsylvania was once the epicenter of American Whiskey production. In the 1790s, Phillip Wigle unwittingly contributed to the great Whiskey Rebellion, an excise tax protest that pitted Western Pennsylvanian distillers against George Washington’s troops. One of two rebel distillers, Wigle refused to pay the tax and punched a tax collector, helping to incite years of riots and protests. He was convicted of treason and was to be hanged for his actions before Washington pardoned him, fearing a civil war.

Named after Phillip Wigle and started in 2011, Wigle Whiskey is family owned and operated out of Pittsburgh, Pennsylvania. After two years of lobbying for changes in state laws, the Meyer family became the first on-premises model for craft distillery in Pennsylvania since Prohibition. Utilizing ingredients from farms in nearby counties in Pennsylvania and eastern Ohio, Wigle Whiskey is a from scratch “grain-to-glass” distiller.

Despite the chaos of the pandemic closing businesses all over the country, Wigle Whiskey has doubled its distillery space, offers “interactive and Instagrammable vignettes,” and a museum-like quality that tells the history of Pennsylvania whiskey. Wigle Whiskey also helped launch the Whiskey Rebellion Trail, a tour of 75-plus cultural sites and craft distilleries. This tour aims to tell “the first chapter of American whiskey” and as Wigle Whiskey co-owner states, “This is truly the only region in America that can tell that story.”

My first tasting of the day was the critically acclaimed Wigle Pennsylvania Wapsie Valley Bourbon. Working with local family farms, Wigle agreed to help bring back the heirloom style of corn known as Wapsie Valley Corn. The protein content is higher than regular corn and the Wigle Wapsie Bourbon was aged more than two years in new, charred oak barrels.

The second tasting was of Wigle Single Barrel Straight Rye, aged a minimum of 4 years in charred 53-gallon oak barrels. 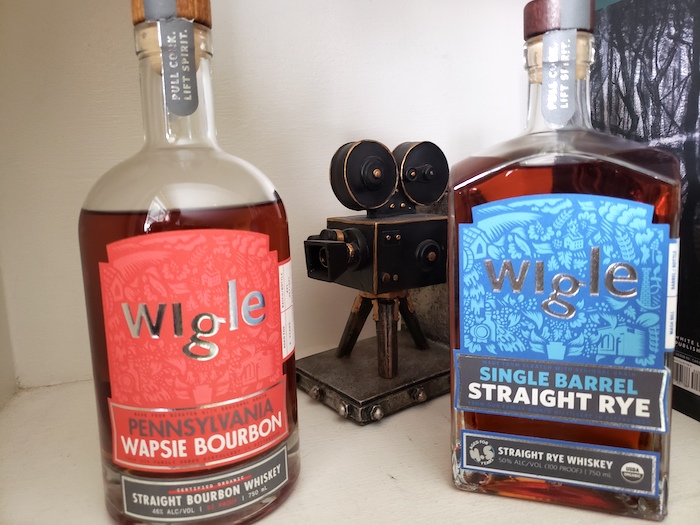 Nose: Dark cocoa and robust nutty scents, bits of cigar tobacco with the slight burn of the paper.

Palate: The mouth has a good level of burn, spicy and complex. I had trouble at times picking out the specific flavor profiles, but it all blended well. The sweet aspects on the nose give way to a more savory whiskey on the palate. Finally I profiled bits of butter balls rolled in baking spices.

Final Thoughts: It appears this bourbon sells out quickly and I can absolutely see why. The flavor profile is complex and highly enjoyable. While not perfect, there is little that I would change of this truly distinctive whiskey.

Palate: This whiskey is so much smoother than its proof. It has a dry sweetness, orange notes, and the woodsy taste of the oak barrel. This is balanced, with no one flavor standing above another, with a nice stimulating finish.

Final Thoughts: A beautifully balanced and well-rounded rye, I highly recommend this Rye for anyone who likes to step into not-so-familiar territory and sip on a bit of history. Wigle states that this is a tip of the hat to the forgotten Monongahela Rye, the golden standard of whiskey in the 1800s and 1900s. If that is the case, those folks had it pretty good.