Editor’s Note: These whiskeys were provided to us as review samples by Westland Distillery. This in no way, per our editorial policies, influenced the final outcome of this review.

A new year marks a new Westland Peat Week edition release, albeit with some drastic changes. The 7th Annual Peat Week hosted by the Seattle-based Westland Distillery was a virtual symposium rather than a large event at the distillery location. Besides offering a tasting kit of the latest peated American single malt, Westland also hosted a cocktail competition during the symposium featuring guest bartenders.

Westland Distillery has been changing the game when it comes to American single malt ever since it was founded in 2010. Matt Hofmann, Master Distiller, was 21-years-old when he cofounded Westland. Obsessed with peat since studying distillation in Scotland.

Two editions make up the 7th Annual Peat Week release. “Escaped!” is this year’s theme. The series plays on escape artists, featuring The Great Füstös, a character from the imagination of Westland. “From smoke he appears, in smoke he vanishes…Can he escape from a reinforced ex-Bourbon barrel secured by massive locks? Will the Rum cask finish him?!? Only time will tell.” So let’s see how the King of Cask Breakers fares in each barrel. 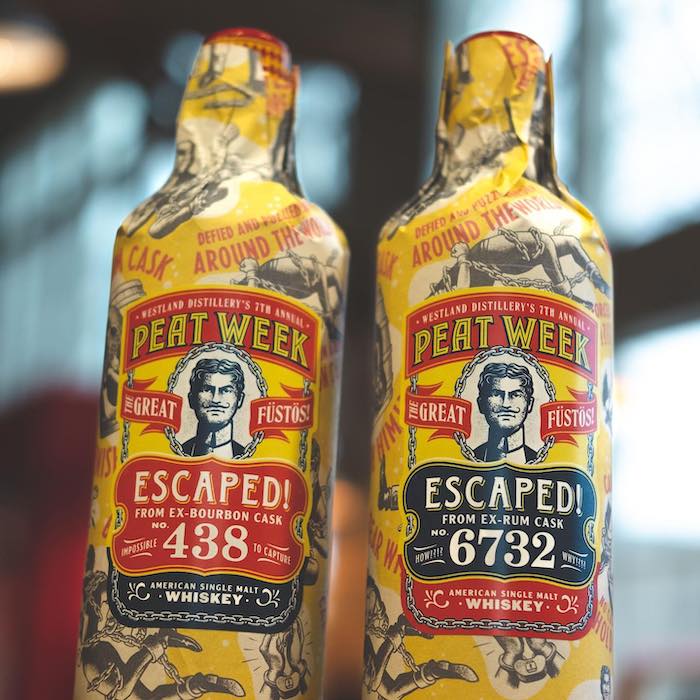 Nose: Apple and cinnamon are at the forefront like warm baked apple pie. Orange segment and zest meet in the middle. Mint and fresh linen come around at the end.

Palate: The whiskey comes off hot with baking spices and the ABV, but it is nothing a little water cannot tame. The mouthfeel is soft. The smoke stands out compared to Cask No. 6732, and it is abundant. Lots of cherry coats the tongue before making room for dried cedar. The finish gives off dark roasted espresso beans.

Final Thoughts: This whiskey does not burn or drink as harshly as the Rum cask finished version. The traditions of scotch are there, but this is a Pacific Northwest single malt for sure. My favourite of the two 7th Annual Peat Week editions, but nothing overly mystifying.

Nose: At first, lemon scented nail polish remover stings the nose. It is followed up with rubber tires before lifting away to reveal more desirable aromas. There is a sour tang with homemade banana pudding. Passion fruit, mango, and green apple are tart and sweet. Bright mint fills out the end.

Palate: It’s extremely hot, but I find that with most rum cask finishes. Combined with the proof, I recommend water or ice. The mouthfeel is soft like limestone filtered water. Sugar cane and cinnamon mix with grain to give a childhood cereal likeness. The middle gives way to apple and banana. Overall, the whiskey is sooty like charcoal. The peat reek comes and goes magically, but it adds a rubber taste that lasts a while on the tongue.

Final Thoughts: At first sip, I could not taste any peat or smoke. I panicked thinking I lost my sense of taste. However, the peat reek appears and disappears which makes for a different tasting with each sip. The rubber tire taste and acetone nose make the whiskey harsh to drink otherwise I would rate it higher.