Editor’s Note: These whiskeys were provided to us as review samples by Boann Distillery. This in no way, per our editorial policies, influenced the final outcome of this review. It should also be noted that by clicking the buy links throughout this article our site receives a small referral payment which helps to support, but not influence, our editorial and other costs.

Boann Distillery began in 2015, and as such, is one of the new kids on the block in the realm of Irish whiskeys. This is not a bad thing. New distilleries are always popping up around the world. Everybody has to start somewhere.

Boann is located in Ireland’s historic Boyne Valley, just about an hour’s travel north from Dublin. Some of the more notable tourist attractions in the area are its array of passage tombs and burial rock formations, among which are the iconic Newgrange, as well as the Knowth and Dowth, dating back to 3000 B.C. and before.

Those behind the company are all about doing it right, especially when it comes to sustainability. All ingredients are natural and sourced from local farmers. The water used in their production practices is sourced from their very own Boyne Valley well. As for the distillation, they use a closed loop water system in order to limit waste and re-use when possible. Just to show that they are serious, Boann is Origin Green certified, which is Ireland’s pioneering food and drink sustainability program.

Even as a younger distillery, Boann has a lot going on. Though mostly sourced as of yet, they have a few different collections in their portfolio. First off, is the core, featuring single malts, including a seven year, seven year cask strength, and a 10 year. Next up is the cask finish collection with different expressions featuring Oloroso sherry, Cognac, and stout finishes.

Lastly, we have the Whistler Trilogy, which comes in the form of three bottlings that “showcases some of the finest whiskey, smoothest honey and freshest cream that Ireland has to offer.” It was put together by Boann’s Master Distiller (Michael Walsh, Ireland’s youngest Master Distiller), Family Beekeeper, and Master Blender. 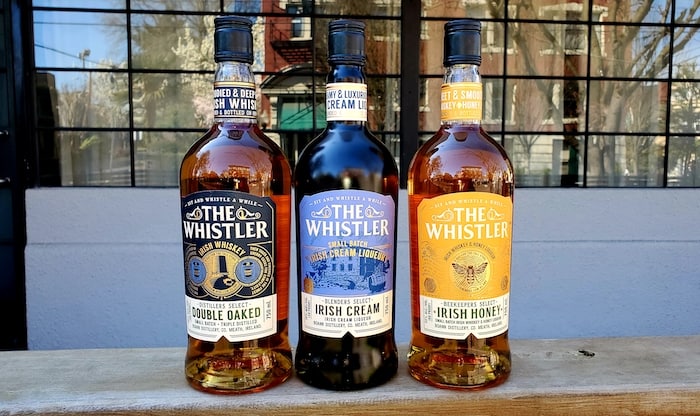 Appearance: A light yellow, reminiscent of a green tea. Some legs present upon swirl in glencairn glass.

Nose: Some booze up front, along with a heavy presence of melon fruit and sherry. Once you dig in, there’s a dash of milk chocolate in the background.

Palate: This one has a lot of fruit going on, and it took a bit of time to figure out which elements were around, especially with all of the sherry going on. Initially found flavors of late summer blueberry mixed with golden raisin, and then a touch of those banana runt candy. Beyond that, a kiss of pepper in the finish.

Vital Stats: 66 proof, 33% ABV. ~$30 per 750ml bottle; ex-bourbon matured Irish whiskey that’s infused with honey harvested from family orchards at the foot of the Hill of Tara in the Boyne Valley.

Appearance: A light mix of yellow and orange.

Nose: Big sweetness. A mix of caramel corn, honey, and graham cracker. Some may also find notes of cereal grains and creme brulee.

Vital Stats: Batch #1, 38 proof, 19% ABV. The whiskey utilized for this blend was from a single pot still.

Nose: Butterscotch and milk chocolate with some baking spices.

Palate: This liqueur covers the palate immediately, flooding you with accentuated flavors of butterscotch, vanilla, and cinnamon. The finish lingers with a bit of toffee.

Final Thoughts on the Trilogy:

This whiskey round up did not go as I had expected. I’m always wary of flavored whiskeys and whiskey based liqueurs. Guess you could say that I’m more of a purist. Both the double barrel and the honey lacked balance, with each erring towards the sweeter side of things. By my guess, too much sherry and then too much honey for the other.

On the other hand, the Irish cream expression was unabashedly bold in a good way. I imagine that the use of local, natural ingredients and whiskey distilled from a single pot still may have been a factor. As a tasting experience, the statement is clear. Yes, this is an Irish cream liqueur. Try me and tell me I don’t know what’s up.

As a whole, all of these selections would go quite well with coffee. However, each on their own, it depends on what you’re in the mood for.