Editor’s Note: These whiskeys were provided to us as review samples by Tattersall Distilling. This in no way, per our editorial policies, influenced the final outcome of this review. It should also be noted that by clicking the buy links in this article our site receives a small referral payment which helps to support, but not influence, our editorial and other costs.

Tattersall Distilling has been around for six years, already having over 30 all natural spirits and liqueurs available across 30 states. One particular category it hasn’t represented to date, however, are bottled-in-bond whiskeys. The recently released Tattersall High Rye and Tattersall Wheated Bourbon change that, and in the process also happen to be the first bottled in bond produced in Minnesota since prohibition.

Bottled in Bond means that the whiskeys are produced in the United States, at one distillery, by one distiller, in one distillation season, aged a minimum of four years, and bottled at 100 proof. The aging happens in federally bonded warehouses under government supervision to ensure the products authenticity. This follows the bottled in bond act of 1897 and signifies a distiller’s craft or skill much like a single malt, single barrel or small batch whiskey.

These two whiskeys are more special for the state of Minnesota because they are made from local Minnesota grains and aged in Minnesota white oak barrels. Even better, “Tattersall is committed to cutting its carbon footprint. Working with Hennepin County and the City of Minneapolis, Tattersall has implemented a comprehensive organics program to compost all botanicals, food waste, straws, cups and more. All spent grains from distilling are stored in a 10,000 gallon silo and picked up weekly by one of our farm partners who uses it to feed his pigs.” 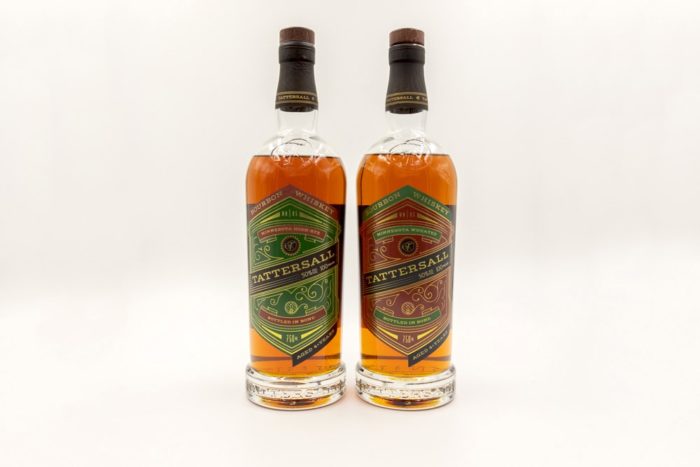 Nose: Ripe, like the perfect apple. It’s crisp with notes of maple and caramel apples.

Palate: The flavors are mild like a custard. It’s smooth with vanilla, cinnamon, and sugar. The finish is hot, spicy, and tangy.

Palate: The mouth flavors are very different than the aroma. It’s not as sweet as the nose leads you to believe. There’s cinnamon, lacquer, under ripe fruit like cherry, which makes it tart and tangy. There’s also a bit of lacquer and black pepper. The aftertaste is stringent with a lingering botanical finish like tea tree oil.

Final Thoughts: Overall the Tattersall High Rye Bourbon is very smooth and mild. It goes from a sweet, caramel apple to a hot cinnamon candy.

Tattersall Wheated Bourbon’s nose is excellent like a warm summer day when you’re wearing coconut body oil and running through a wheatfield. The mouthfeel is very satisfying. The discrepancy between the nose and palate is a bit mind bending but it adds to the complexity.